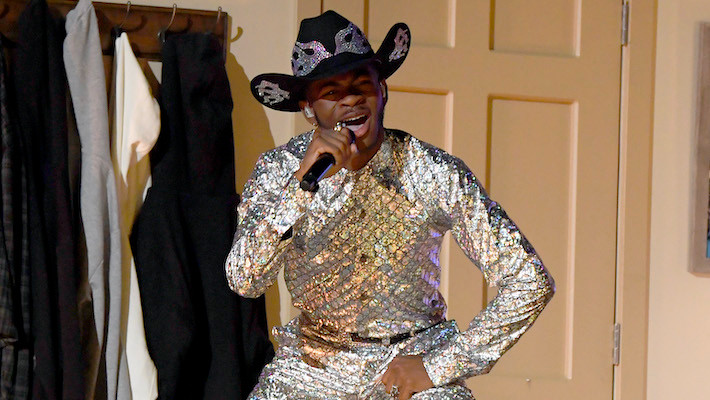 Lil Nas X is riding high after winning a pair of Grammys for his juggernaut 2019 hit “Old Town Road,” but it looks like not everyone approves of his carefree, adventurous style. Just like how country vets attacked his song for not being country enough, one veteran rapper voiced his criticism of Lil Nas’ fashion choices when he showed up at the ceremony to collect his award. But when Atlanta rapper Pastor Troy took off on Nas’ pink Grammys look, the social media-savvy 20-year-old did what he always does — made a joke about it.

Pastor Troy — who is perhaps best known for a punchline about him on Kanye West’s debut album The College Dropout — posted a photo of Nas’ all-pink, BDSM-inspired cowboy costume with a long, homophobic caption deriding the Grammys for “pushing this sh*t on our kids.” “Welp, Guess I won’t be winning a GRAMMY,” he wrote. “If this what I gotta wear. They love to push this shit on Our Kids!! The other day @applebees had some punks kissing and laughing eating mozzarella sticks. First Thing My 14 yr old Son said was, “F**** Applebee’s” And It Brought Joy to My Heart!! He sees it…their agenda to take the masculinity from Men, Black Men Especially. Some may say, “He Making Money!!” Rupaul do too, but I ain’t bumping his CD!!! Integrity is Priceless. Y’all Better open that 3rd Eye and let your Sons Know What Is Real…Or They Ass Gone Be Headed Down That Old Town Road Foreal!”

Eventually, screenshots of the rant made their way to Twitter, where Lil Nas did what he does best (all respect due to his musical talents) and dismissed the hate with a pithy comment. “damn i look good in that pic on god,” he replied, seemingly as unbothered as anyone has ever been. All jokes aside, it’s been just about a decade since a Pastor Troy album charted and even longer since one of his songs hit the Hot 100 (“Are We Cuttin’” featuring Ms. Jade reached No. 96 in 2002). With all due respect, maybe he could focus on making music more people liked than what other men wear.