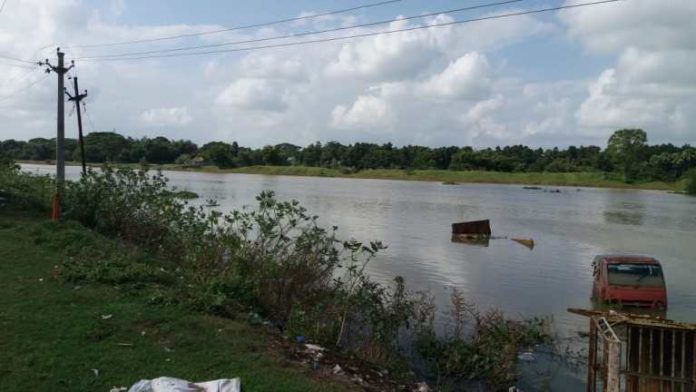 If sources are to be believed, Prakash Chandra Nayak, a resident of Gulnagar, located on the outskirts of Kendrapara municipality last year filed a petition to the Prime Minister Office (PMO)by bringing to the notice of Narendra Modi about the sorry plight of the Gobari river and the branch canal of Kendrapara.

He alleged that Gobari river and the branch of Kendrapada canal, which was established during the British era in 1885  by the  British irrigation company, is stated to be once the lifeline of locals as the two water bodies were catering for the drinking water and farming needs of people of the area. But the water bodies have since been polluted and now it has failed to fulfill the needs of people.

Discharge of sullage from the toilets along the canal and Gobari river is a testimony to the blatant violation of environmental laws, but nobody has taken steps in this regard in the past. Officials were mute spectators and possibly encouraged the denizens to release their sewage to canal and Gobari river alleged the petitioner.

Piles of garbage along with weeds and small bushes were developed on both sides of the Kendrapara canal, creating an unhygienic environment for locals. In several places, locals unauthorisedly connected their sewage and discharge the sullage into the canal as well as to the  Gobari river. Even, the slum-dwellers, who were staying in the canal bunds and Gobari river embankments, also let out their waste into water thus polluting the water. The sewage not only pollutes its water but also makes the maintenance of canal difficult. The sewage changed the scenario, leading to the growth and thriving of weeds that obstruct the flow of water, causing heavy siltation.

He alleged that the Swachha Bharat Mission has completely failed in this district. So he requested the Prime Minister to sanction a special fund for making the Kendrapara canal’s branch and Gobari river pollution-free by making their water bodies hygienic and useable.

Acting on the petition of Praksh Chandra Nayak, the office of the Prime minister forwarded the petition to the Ministry of Jal Shakti, (Department of Water Resources, RD and GR), National River Conservation Directorate to take steps in this regard.