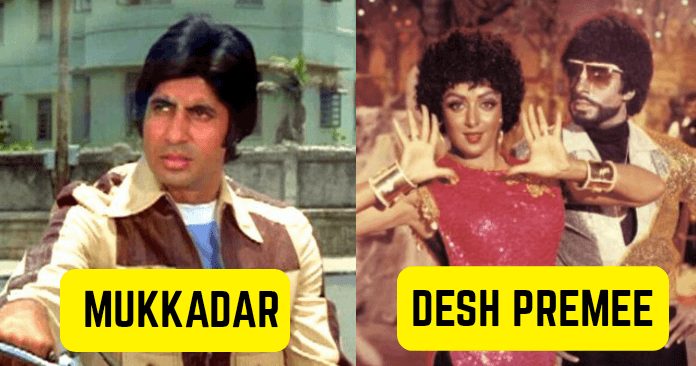 We all know Kader Khan as a character actor who shone in the 90s for playing comical roles. Little you know that Kader khan is an excellent writer as well and he has written the screenplay for many movies. And we are not talking about the low budget small movies, these movies featured big stars like Amitabh Bachchan and Rajesh Khanna.

These movies include the top 13 movies in which screenplays
and dialogues are prepared by Kader Khan.

Will you ever forget the famous movie Agneepath and its
awesome dialogues? Well… all credit goes to Kader Khan who has prepared the
screenplay for the movie along with Santosh Saroj. Agneepath is one of the most
important and famous movies of Amitabh Bachchan. The movie was so popular that
it was remade with Hrithik in the lead role.The dialogues of Agneepath are
amazing and chartbusters at that time.

One of the most underrated movies in the filmography of
Amitabh Bachchan is the Desh Premee. Amitabh Bachchan was seen in a double role
playing the character of a con and a father. The movie has many dialogues that
will leave you speechless. Made on the budget of 4.2 Crore movie earned 63
Crore at the box office. Movie was written by Kader Kha along with K B Pathak
and Prayag Raj.

Some of the hidden gems in the Bollywood industry include the
movie Fifty Fifty starring Rajesh Khanna,Teena Munim, Ranjeet, and Kader Khan
in lead roles. The film is directed by Shomu Mukherjee who is the father of
Bollywood actress Kajol.

Gangaa Jamuna Saraswati is a multi-cast movie featuring
Amitabh Bachchan, Mithun Chakraborty, Amrish Puri in lead roles. The movie was
directed in 1988 by Manmohan Desai. Kader khan has prepared a crisp screenplay
for the movie, and the film was a big hit of the year. Movie was written by
Kader khan,Anil Nagrath and Sohel Don.

Indrajeet is the movie about a police inspector played by
Amitabh Bachchan. The movie was directed by K. V. Raju and it has hit the
theatre in 1991. The movie hadn’t made the impact of fans then but it becomes a
hit after its premiere on television.

The movie is as much interesting as the title of the movie
is, Katilon Ke Kaatil. All credit goes to the writer of the movie and the
writer is none other than Kader Khan. The film has notable actors of its time
including Dharmendra and Rishi Kapoor.

It is one of the famous movies in Amitabh Bachchan’s
filmography. The film was a big hit on the box-office and people becomes a
die-hard fan of Amitabh Bachchan. Kader khan has written all the crispy
dialogues for the film.

Maha Chor is an action comedy film directed by Narendra
Bedi. The film featured Rajesh Khanna in the lead role and he was paired with
Neetu Singh for the first time. The film was a hit on box-office.

The Rajinikanth starrer film Mahaguru was released in 1985.
The movie was directed by S.S. Ravichandra and written by Kader Khan and
Gyandev Agnihotri. Rajnikanth was paired alongside Meenakshi Seshadri.

One of the biggest hits in the long Bollywood career of
Amitabh Bachchan in the movie Muqaddar Ka Sikandar. This 1978 release was the
fifth of the ninth movie with Prakash Mehra. The film also includes Rekha,
Amjad Khan, Raakhee, and Vinod Khanna in a pivotal role.

Satte Pe Satta is about to get remade in the Bollywood in
upcoming years. The movie was hilarious and one of the best films in Amitabh
Bachchan Bollywood career. The screenplay of the movie was written by none
other than Kader Khan.