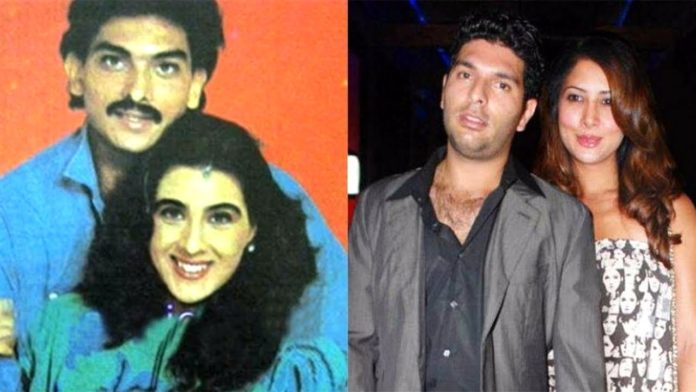 Bollywood and Cricket have crossed paths on various platforms. Be it for their movie promotions or IPL, the rumors of cricketers being linked with Bollywood actresses had always have, are, and will always be nearby till eternity !!!

Also, cricket is not called a glamorous sport solely because of its wealth and fame, but also due to its deep relationship with Bollywood.

Over the years there have been several instances where actresses and cricketers have been romantically involved.

From Mansoor Ali Khan Pataudi and Sharmila Tagore’s love affair in the 1960s to Virat and Anushka in the present day, cricketers and Bollywood actresses have from time to time seemed to have a thing for each other!!

While some of the couples have proved that such divine alliances are successful, others were not able to get a seat on the love boat. So today, with this post, we are going to introduce you to some famous Bollywood actresses who dated cricketers, but didn’t marry them :

Long before the Bollywood actress Amrita Arora tied the knot with Shakeel Ladak, she made the headlines for dating Pakistani-origin Australian cricketer – Usman Afzal. The cricketer was known for having played from the England team in 2001.

The duo met at a common friend’s party and fell for each other instantly!! He even started making regular appearances on family functions and special occasions. Amrita even made a statement, “I’m certain this is the man for me.

We’ll make it legal whenever it’s the right time for both of us.” However, after being together for more than a year, the duo decided to part their ways.

They shared an 8-year long relationship that stood strong despite ups and downs. And it was quite obvious for them to get married after being together for years.

But surprisingly, the duo announced that they are not getting married, but are separating instead!

Both parted their ways and later on, cricketer got married to Chak De India fame actress Sagarika Ghatge.

It was one of the most-talked-about affairs of the 80s which came into the public eye after Amrita and Ravi posed together for a magazine cover. They were even rumored to be engaged in 1986.

But the duo soon realized that they were not meant for each other and were poles apart due to which they decided to separate their ways.

This was quite evident when Ravi quoted “I definitely don’t want an actress wife. I am chauvinistic.

Her home should be her first priority.” To which Amrita had replied, “At the moment I’m too involved in my career to give it up. But I’m sure after a couple of years, I will be ready to become a full-time wife and mother.”

Cricketer Yuvraj Singh was rumored to be dating both Deepika and Kim (of course, at a different time!) before he got hitched to Hazel. However, things did not work out and Deepika moved on with Ranveer Singh and Kim got married to businessman Ali Punjani.

Neena Gupta’s love life has been just like a roller coaster ride which is full of ups-downs, twists and turns!! Even though Vivian was already married, these two went on quite strong, but never got married.

It is believed that Neena and Richard met at a party in Mumbai. The passion between the two was brimming and within a few months, Neena was pregnant with daughter Masaba Gupta.

This is one of the relationships that garnered a lot of media and fan gaze. With media attention starting to take a toll on Sourav’s flourishing career, he ended his love story by marrying his present wife Dona.

While Sourav maintained a ‘No Comments’ stance on this personal issue, Nagma went on speaking publicly that there was indeed something on between her and the Prince of Kolkata. The story did not have a happy ending.

In 2012, it was Sofia who revealed it through Twitter that she had dated Rohit but it was now over.