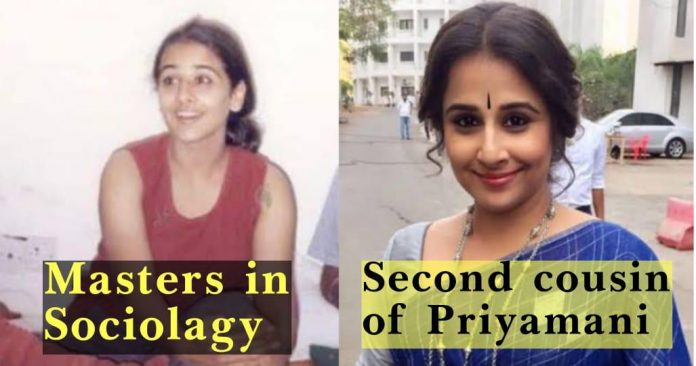 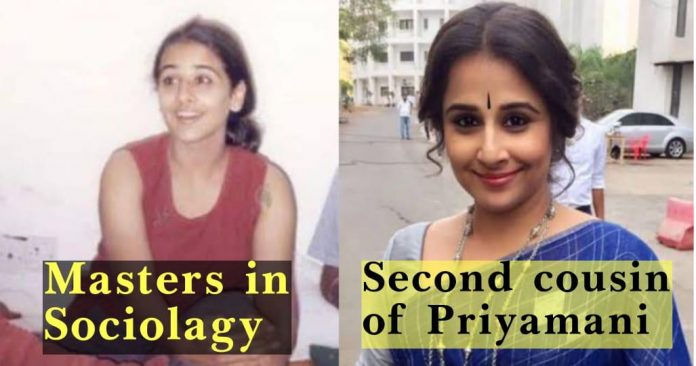 Vidya Balan is one of those few Bollywood actresses who have lived their good stardom and still appreciated for their work.

Since Bollywood is known for its male domination, Vidya Balan proved that she is exceptional. As most of Bollywood actresses career is shorter than the awards night, the talent and performance delivered by Vidya Balan are truly appreciated in the industry.

Vidya Balan is a big name in the history of Bollywood. She has broken the cult of male-dominated cinema by delivering two back to back women-centric movies, The Dirty Picture and Kahani respectively.

Well, her story was not started with the spotlight as she has done a great journey to reach the place where she is now. Check out these 11 lesser-known facts about Bollywood pride Vidya Balan to know her better.

1. Vidya started facing the camera at the age of 16

Vidya Balan was born in Chembur, Mumbai and belongs to a Tamil family. The dazzling world of glamor is fascinating to her since her childhood.

She grew up admiring the acting and dancing skills of Shabana Azmi and Madhuri Dixit. She was just 16 years old when she featured in the Ekta Kapoor’s show ‘Hum Paanch’ as Radhika.

It is said that there is a woman behind every successful man. But in the case of Vidya Balan, the phrase runs in reverse.

Siddharth Roy Kapur is the owner of UTV motion pictures. Sid met Vidya due to their fondness in the Bengali language. Sid has produced most of Vidya’s film.

3. Vidya has a Master degree in Sociology

The actress is quite literate apart from her acting and screen charms. It is the reason that she always has back up if she failed in the industry, then she could go other ways.

In recent years, many movies explore the women’s side of the story. Little you know that before the release of the dirty picture, most of the Bollywood movies were male-dominated where girls were used as the object to lighten the mood.

In this way, Vidya has changed the whole mindset of Bollywood cinema.

Apart from the movies, Vidya is one of those famous actors who have gone through busy photoshoot and ad shoot schedules.

For the record, Vidya did 90 ads shoots back to back, and she also appeared on the cover of a magazine in the Charlie Chaplin look. She cleared that she loves Charlie Chaplin, and especially the Sridevi character in Mr. India.

Since Vidya Balan has a great acting career with some bold roles as well, a picture went viral in which Vidya was seen adorning transparent lingerie.

The picture has made several headlines but Vidya denied such photoshoot and said that the picture was morphed.

7. Vidya Balan and her weight issue

In most of her interviews, she confessed that she has spent several days thinking about her unbalanced physique and finally end up agreeing with her true self.

She said that people will continuously say something about the physique. However, the most important thing is to embrace yourself and then the confidence will show up.

8. Vidya Balan is a book worm

Vidya has said that she is a voracious reader and loves to read books by Paulo Coelho.

Little you know that Parineeta is not the first film of the actress Vidya Balan. She got the initial recognition as an actress with the movie Parineeta in which she shared the screen with Sanjay Dutt and Saif Ali Khan.

However, she first featured in the Bengali film ‘Bhalo Theko’ that was released in 2003.

10. She has a popular actress sister in the industry

Priyamani is the second cousin sister of Vidya Balan who
worked with Shah Rukh Khan in the movie Chennai Express.

11. Vidya Balan has some other skills

Vidya Balan can speak many languages that include English, Malayalam, Tamil, Hindi, and Bengali fluently. She giggles very well as she learned it by watching TV serials.

Vidya has a great matchmaking style and she helped many of her friends to find a better partner. Apart from this, Vidya Balan has OCD.