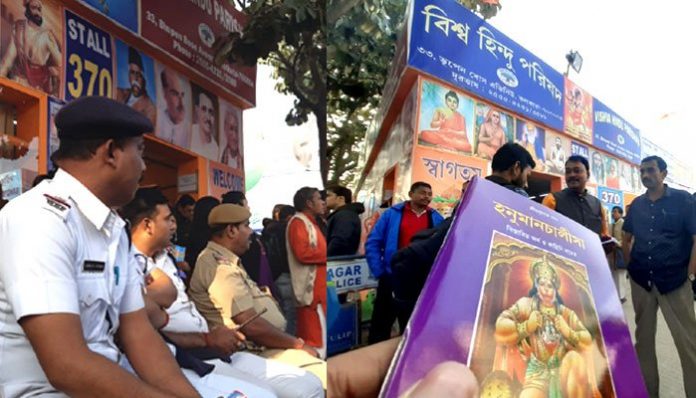 Now a video has emerged in which an eyewitness asserts how during the scuffle, leftist goons attacked the stall of Vishwa Hindu Parishad and trampled the copies of Srimad Bhagavad Gita under their feet.

Eyewitness Account of What happened in Kolkata Book Fair – Leftists attacked the stall of Vishwa Hindu Parishad and stepped on the Bhagavad Gita in order to protest against CAA ????

The eyewitness, who identifies herself as Ranjana Mukherjee in the video while recalling the Sunday scuffle at the Kolkata Book Fair says that she reached the book fair around 4 pm. She was roaming around when suddenly she heard some noises from a nearby stall. On approaching the lady reportedly saw many boys and girls “chanting ‘Azaadi’ slogans outside one bookstall”.

She recalls how this protest suddenly broke into a severe fight. The leftist goons sloganeering outside VHP’s stall suddenly started creating a ruckus, entered stall number 370 and started throwing out the books. They also stepped on the Bhagavad Gita, recalled Ranajna Mukherjee.

She says that the crowd gathered there objected and tried to intervene but fearing the rage everyone backed off. Soon police intervened and dispersed the goons, but they returned again. Finally, a heavy police contingent arrived and took control of the situation, asserted the lady.

According to reports, students from Kolkata University were chanting anti-CAA, anti-NRC slogans outside stall number 370 of the VHP at the Kolkata Book Fair since Sunday morning, causing huge inconvenience to visitors at the venue which was packed to capacity as it was the last day and a holiday.

In the afternoon when the stall named ‘Janabaarta’ started distributing Hanuman Chalisa, it triggered an altercation between left-wing activists and VHP workers. Following this the police stopped VHP from distributing the book, saying that it may cause the situation to deteriorate and may trigger communal tension. This caused an argument between VHP workers and police officials, after which police closed the stall.

But after that VHP activists confronted the police by asking why can’t they distribute Hanuman Chalisa when other stalls were distributing Quran and Bible in the book fair, the police had no reply and they allowed to reopen the stall. After that VHP resumed distribution of the book amid heavy police presence.

Police also stopped anti-CAA anti-NRC protests held by activists in the book fair and arrested 5 activists. The book fair had seen tension on Saturday also when BJP leader Rahul Sinha had visited it. Left-wing students had reportedly gheraoed him and chanted go-back slogans against him. This had caused a scuffle between the BJP and Left-wing workers before the police brought the situation under control.