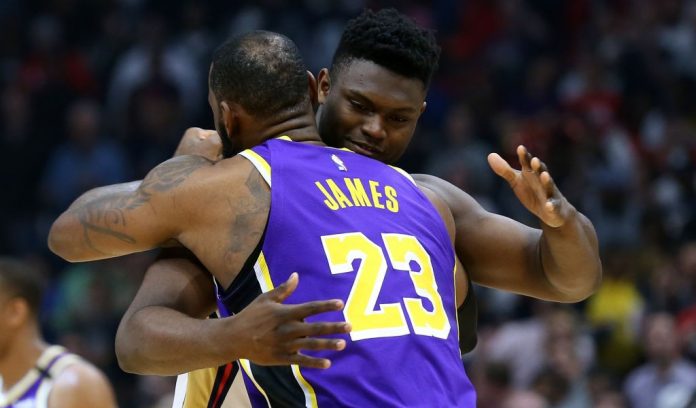 For the second time in as many weeks the Lakers and Pelicans squared off, giving us a chance to once again see LeBron James go toe-to-toe with Zion Williamson. Like the first meeting, it was L.A. that got the victory despite being without Anthony Davis and Alex Caruso for the night.

The result wasn’t surprising as LeBron once again showed why he remains among the very best in the world on a basketball court, with 34 points, 13 assists, and 12 rebounds in a 122-114 win. James’ performance was just enough to take down Zion and the Pels, as the rookie sensation had 35 points and seven rebounds on the night as he once again put forth an exceptionally efficient evening from the field and the charity stripe.

It’s the kind of duel fans (and ESPN, who had the primetime Sunday matchup) were hoping we’d get. What LeBron is doing in Year 17 remains astounding, as he at times wills this Lakers team to wins with Herculean performances like Sunday’s. On the other side, you have Zion continuing to show that he’s not just the future of the NBA but a big part of the present, with his 11th straight 20-point game and third 30 point game in 15 career appearances.

The game also showed where New Orleans’ young team has room to grow in learning how to finish games, particularly against top flight opponents. Brandon Ingram, who has been superb in his All-Star breakout season, struggled mightily and the young Pelicans couldn’t get a stop when they needed to once LeBron decided to take over late, as he dominated Josh Hart and others in the post.

Defense is far from the Pelicans strong suit, and addressing that need is the next step for David Griffin in building this roster to compete in the wing-heavy West. Still, the bright spots are clear in New Orleans, headlined by Zion and a young team that is fearless and ever-confident on the offensive end.

For the Lakers, it’s the kind of game that emphasizes why they’ll be so tough come playoff time. LeBron’s ability to morph his game to pick apart whatever gameplan you’ve created for the Lakers offense is stunning to watch. In this one, he happily strolled to the block where he cooked any combination of Hart, Jrue Holiday, and whomever else drew his assignment. When the Pelicans sent doubles, he calmly rifled passes to the weakside corner for a wide open three. When New Orleans sent Zion Williamson to be a physical presence, LeBron walked it back outside and hit the cold-blooded dagger in his eyes.

It’s a performance we’ve almost grown numb to as a basketball audience, but it’s truly remarkable how far LeBron has come as a player to have so many different things in his bag. For us, it’s something to marvel at. For Zion Williamson, it’s an example of where he can go with his own game to be more versatile and more impactful, even as he dominates the league as a rookie.