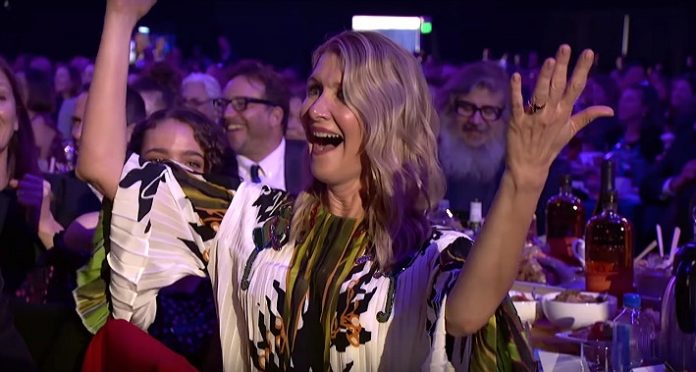 The Independent Spirit Awards on Saturday were a great chance for Adam Sandler to poke fun at his Oscars snub for Uncut Gems, but it was also a chance for the show’s writers to pay special tribute to one actress in particular. During the Aubrey Plaza-hosted show on Saturday, the show took special time out to honor queer films that were nominated, but also some moments in film that were LGBTQ-friendly but may have gone unnoticed by many.

“LGBTQ representation in film is more important than ever,” Plaza said before introducing the Gay Men’s Choir Of Los Angeles to help “shine a spotlight on some of the gayest moments in other films that you might not have noticed were gay.”

“The women of Parasite” and “J. Lo pole dancing to Fiona Apple” were some early favorites that were pointed out, but it quickly became about one woman: Laura Dern. She got three specific shoutouts from her performance in Marriage Story before the whole damn song became about her.

The crowd, predictably, loved it, as did Dern herself, who danced along as a choir sang her name over and over again while various images of her from films popped up. It was a hilarious moment in the show, and one that fans certainly reacted to online.

If she can take that kind of energy into Sunday night, her Oscar win for best supporting actress is already in the bag.