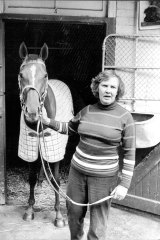 Trailblazer: Betty Lane was the first female trainer to be granted a No.1 licence, in 1980.Credit:SMH

Like Joan Of Arc, victorious in the Hundred Years’ War, Betty Lane attacked the parapets of male domination and bigotry in Australian racing that existed for just as long.

Fortunately she had the assistance of Tiger Holland, a vision splendid mounted on his pony watching Randwick gallops, more Buffalo Bill than Don Quixote, to accomplish the impossible dream.

“In 1962 racing wasn’t male dominated – it was male exclusive,” Lane emphasised in her memoirs  I Did It Their My  (Their) Way, released late last year.

Randwick reared, she wanted to be a racehorse trainer in the environment of “fools walk in where angels fear to tread”. When applying for a licence with the Australian Jockey Club, she was treated with every courtesy by “seven elderly gentlemen”.

Later a spokesman declared: “Thank you Miss Lane. We cannot give you a licence. It is not our policy to license women. Good day.”

As she walked out they all rose from their seats.

“Perfect manners accompanied by the perfect dismissal,” she concluded.

However Lane didn’t retreat. After 30 years (15 at Randwick where she was finally welcomed by the AJC) and 1000 winners, she proved her point.

To do so, she went bush where she teamed with Holland, a broken-down jockey with a bad knee, poor hearing and true grit like few, if any, others.

For economic reasons, Lane purchased a property at Geurie (population 250), 380 kilometres west of Sydney. It had a couple of sheds, which she transformed into stables, and an ancient plywood caravan from Sydney for her accommodation.

The racecourse had never been used for training, so she borrowed a tractor from a local farmer to farrow the ground.

“Tiger offered to help me for a few weeks,” Lane explained, which started a lifelong partnership. “Amongst his many attributes was his ability to ‘feel’ a horse … he developed a sense of horses that was uncannily accurate.

“We worked under uncannily tough conditions for 365 days a year in heat waves, frost and dust storms.”

And the Geurie stable gate was always open to waifs, including a 14-year-old boy whose father “Spider” told her his wife  and mother of the lad  had recently died.

“The boy yearned to be a jockey and Spider felt the opportunity of being apprenticed would help him cope with the loss of his mother,” Lane explained.

Lane obliged and Pat Webster had a start. Webster became a successful apprentice and No. 1 Randwick trainer. And, like Lane, his door has always been open, particularly to the neediest.

Still, Lane subsidised her training by selling race finish photos to owners and other trainers. Meanwhile Holland was moonlighting, broadcasting races between rides and being a television personality in Orange with Tony King, who became CEO at the AJC.

Following country successes, Lane prepared her first Sydney winner in 1967 and established herself as a top trainer. In 1976, she became the first women to be fully licensed at Randwick.

One of her horses broke loose from her Kensington stables and she tracked him down to Centennial Park.

After a 1000 winners Lane retired in 1991 to give Holland his chance at the helm. Three years later he was raised to No. 1 trainer. Alas, in 2000 he developed a swallowing problem with food and liquid going into his lungs and not his stomach. A tube was inserted through the side directly into his stomach. Tiger died in 2008, at which time he had no food or drink whatsoever by mouth for six years. Despite this, he kept getting up at 3.30 every morning, applying his horse sense.

Joan Of Arc died at the stake, but she didn’t have Tiger Holland riding shotgun.