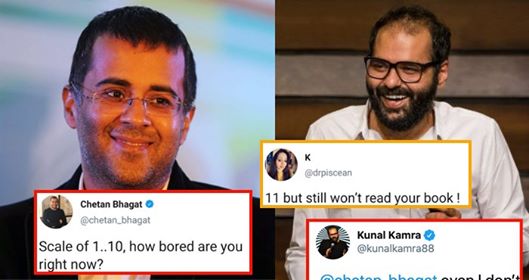 People around the country are now having a lot of free time during the ongoing nationwide lockdown, that was imposed by Prime Minister Narendra Modi in order to contain the spread of the Coronavirus. Celebrities from all walks of life have been spending a lot of their time on social media these days.

On Tuesday, we saw two of Twitter’s favorite celebrities square off and steal all the limelight on Twitter. Popular YouTuber and comedian Kunal Kamra, who is infamous for his controversial tweets and for taking jibes at PM Modi, instead turned his guns on Chetan Bhagat on Tuesday.

Well, what happened was Kunal Kamra took to his Twitter and shared a screenshot of Chetan Bhagat’s tweet where he asked his followers: ” Scale of 1-10, how bored are you right now?”

The screenshot also featured a reply from a Twitter user that read “11 but still won’t read your book.”

“Chetan Bhagat, even I don’t get insulted to (sic) frequently and badly”

.@chetan_bhagat even I don’t get insulted to frequently & badly…

Chetan Bhagat was quick to take notice of the Tweet and came up with a perfect reply to the comedian. He wrote:

“You have to be someone to get insulted bro.”

You have to be someone to get insulted bro. https://t.co/BsMOevjIsz

Kunal Kamra tried to comeback however Chetan Bhagat had already won the show with his tweet:

“‘Being Someone’ is the right category your career falls into, No one knows why but for some godforsaken reason you’re still relevant…

*Don’t take this as a compliment*”

‘Being Someone’ is the right category your career falls into, No one knows why but for some godforsaken reason you’re still relevant…

Twitter was soon flooded with reactions to this. Here, check out the reactions of Twitterati on this: