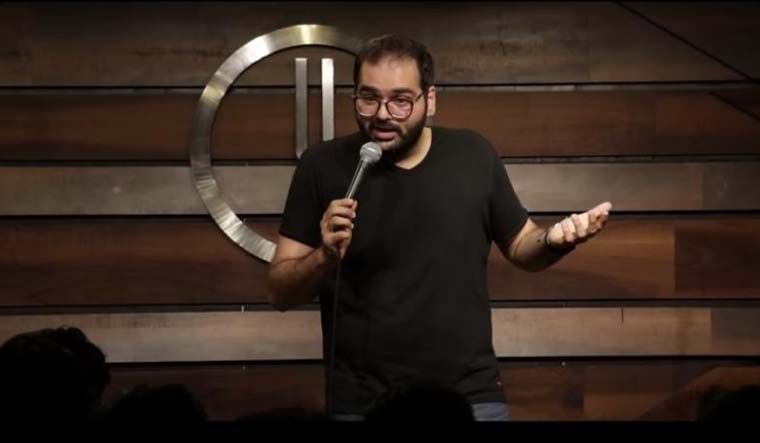 Mumbai: Stand-up comedian Kunal Kamra, banned by three airlines from flying for allegedly heckling TV journalist Arnab Goswami aboard a flight, said Wednesday he just wanted to express solidarity with PhD scholar Rohith Vemula and at no point he was ‘unruly or disruptive’.

Kamra said the flying suspension was not ‘shocking’ for him and explained why he allegedly heckled Goswami.

In a fresh statement, Kamra said the emotions got the better of him, but if he hadn’t reacted – triggered by the coverage of Vemula’s death by Goswami in his TV shows – he could not have forgiven himself.

Vemula, a scholar at the University of Hyderabad, committed suicide in January 2016 allegedly due to caste discrimination on the campus.

The comedian was suspended Tuesday from flying by IndiGo and Air India after he allegedly heckled Goswami aboard a Mumbai-Lucknow plane of IndiGo and posted a video clip of the incident on his Twitter handle. In the video clip, Kamra is seen making a reference to the death of Vemula.

Kamra took to Twitter, Wednesday and shared the link of an 11-minute video, a compilation of multiple past  incidents, and wrote, “The emotions did of course get the better of me (referring to the Goswami episode), but if I didn’t emote, I’d never be able to forgive myself.”

Kamra uploaded the video on his YouTube channel which shows a Republic TV reporter confronting RJD leader Tejashwi Yadav on a flight, despite repeated requests from him and the cabin crew to stop the camera and take seat.

The video also highlights Goswami using words like ‘cowards, lunatic, lapdog’ and calling Vemula’s death as a ‘personal tragedy’ of an individual used as a ‘political mileage’.

It further shows dichotomy in Goswami’s coverage of Vemula’s death, between 2016 and 2017, on his shows. The video ends with the reading of Vemula’s last letter before his suicide, sourced from filmmaker Anand Patwardhan’s documentary, ‘Reason/Vivek’.

“I apologise in advance if this video comes across as an extension of my saviour complex. All I want to do is express my solidarity and love for my hero Rohith Vemula,” Kamra wrote at the end of the video.

SpiceJet became the third airline which suspended Kamra from flying until further notice on Wednesday.