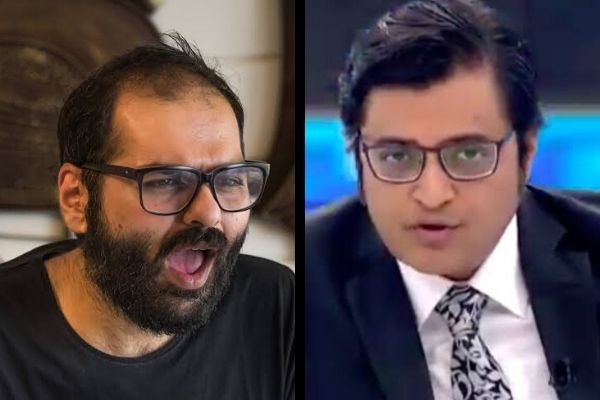 On Friday, comedian Kunal Kamra took to Twitter to display his creepy behaviour. He proudly declared that he had got hold of Arnab Goswami’s number without his permission. He further went ahead to message him and complained that the journalist was not responding to his requests for holding a debate.

I found arnab’s number I’m still asking him for a debate and he’s just not responding, @republic is your editor a coward or a nationalist? pic.twitter.com/Oqph1KpYV3

Mr Goswami, this is my number you can reach out to me whenever you think you want to have a civil debate on what is the idea of nation and who’s a nationalist…. all my resentment towards you is my past. I’m a follower of Buddha and Mahavira and I want to extend you an olive branch to have a civil discourse..that’s all I asked for in the first place… if you were less of a prick this we wouldn’t have gotten here, anyway, this is Kunal Kamra & I’m not sorry.

Arnab Goswami has made it clear that he does not want to have any conversation with Kunal Kamra, but Kamra seems very much obsessed with the Republic editor as he continues to stalk him on both online and offline world.

Netizens were quick to call out his creepy behaviour. A Twitter user @oldschoolmonk pointed out the insatiable obsession of Kunal Kamra with Arnab Goswami.

Another Twitter user @Vinodhari2 slammed Kamra and asked whether he has the required credentials to be a part of a national debate. He also said that he should air his “lost interview” with Vivek Agnihotri first.

you first finish the promised session with vivek, anand and OP india which you have not yet broadcasted with excuse- lost tape. Finish this first

For Arnab, u cannot demand this. What is your virtue to be in a national debate??? Reach that level first

Another Twitter user @Babaaagaya accused him of being an attention-seeker.

One user told him that his use of profanity and vulgar language make him unfit for any discourse in public forum.

You language doesn’t indicate any civility! Using profanities and vulgar slang for private parts in college crowd and in your Russel Peter style profanities infested excuse for a comedy show may be ok with you, but not on a public forum!

On Tuesday, the mentally unstable comedian heckled Arnab Goswami on an Indigo flight to Lucknow. This prompted several leading airline companies to put Kunal Kamra on a no-flying list. Instead of being apologetic about his ruthless behaviour, he carried a placard that read “I am not sorry” outside Republic TV studio.

Sorry for not being sorry… pic.twitter.com/2WCPSi971U

To whitewash his outrageous actions, the cabal of liberal spin masters soon came to his rescue. Kunal Kamra was thus motivated to harass Goswami on board a flight again. Whether the comedian attempts to stay in the limelight or is deeply obsessed with the journalist, we will possibly never know.