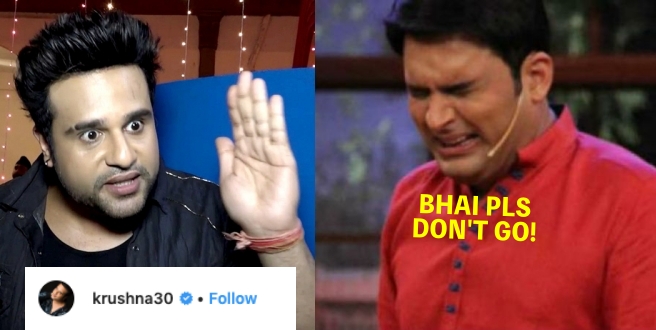 One of the best comedy show , which is having a huge TRP , is none other than The Kapil Sharma Show. He made the characters look so alive in whatever they perform and this is how they win the heart of the audience.

Recently, when there were the actors of Jawani Jaaneman on the set of TKSS , all had a fun time .. In this session , Krushna Abhishek who plays the role of Sapna , having a beauty parlor and she offers different types of massages , explaining the guests about the type ..

During the episode, Sapna was willing to leave the show and said she doesn’t want to continue ..

Don’t worry readers…. It was all in the fun .. Sapna expressed her views about the perks and relish them , being the Nanny of the little star kid .

She mentioned that she wants to become Tamiur’s nanny. Not only this, she also said that he wouldn’t mind becoming a helping hand to Taimur’s father . Well that was a hilarious statement passed by her ????

In the same episode, Saif schooled Kapil as she asked why is Kareena not with him, as he was eagerly waiting for the pretty actress. Kapil also asked Saif as to what Kareena calls him at home and to which Saif replied, ‘You are married’. Taking a dig at Kapil’s flirty nature, Saif said that last time when Kareena was on the show,  ‘Tum Kaafi phel gaye the.’ On this Kapil wittily said, ‘It is nothing like that. I flirt with everyone’s wife no matter what,’ which made everyone burst in a fit of laughter.