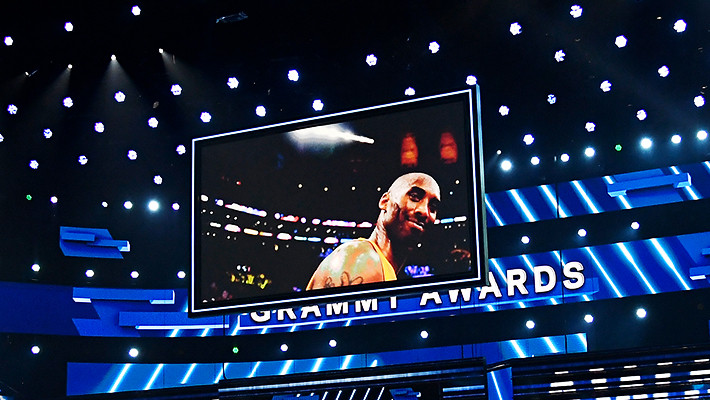 The biggest night in music didn’t feel so major this year after the tragic death of NBA legend Kobe Bryant. The Los Angeles Laker icon died yesterday at 41 in a Calabasas helicopter crash that killed eight others, including his 13-year-old daughter Gianna “Gigi” Bryant. News of his death sent tremors throughout the world, especially Kobe’s adopted home of Los Angeles.

LA’s Staples Center, the site of this year’s Grammys, was full of entertainers who have been patrons on nights when Kobe scored 50, hit clutch playoff shots, and clinched championships. But sadly, the only physical remnants of the Mamba last night were the illuminated 8 and 24 jerseys that hovered over the proceedings. They were glum reminders of just how minute the night’s trophy dispersal was in the grand scheme of life.

Grammy host Alicia Keys opened up the show by acknowledging the “crazy sadness” reverberating throughout the city. She added, “I’m literally standing here heartbroken in the house that Kobe Bryant built.” Several performers paid homage to Kobe throughout the ceremony, which many people on social media proclaimed should be outright canceled or postponed.

It’s unlikely that the Grammy committee gave much thought to halting their 62nd showcase, but the online sentiment reflected Kobe’s massive impact. He’s a transcendent figure who has been canonized in pop culture for over 20 years. He was a father of four, and his wife is currently expecting. It’s understandable that many people, even non-basketball fans, were too flummoxed by grief to give the Grammy festivities the attention they usually garner.

Many of Kobe’s fans took to the Staples Center to grieve him and his daughter earlier in the day. People in attendance noted the throng of fans in Lakers gear crossing paths with tuxedo-clad Grammy attendees. Even for a city rooted in spectacle, the scene was unforgettable.

Fox LA tweeted that, “officials [were] asking people not to gather outside of the Staples Center due to tonight’s Grammy Awards,” but no one was going to honor that wish. As Alicia Keys proclaimed, the Staples Center was Kobe’s house, and every artist in the building was just a guest. Fans were going to pay homage. That commemorative energy carried over to the ceremonies.

Billie Eilish and Rick Ross spoke on his legacy. The Jonas Brothers reportedly canceled interviews out of respect for Kobe and his daughter, wearing purple ribbons on the red carpet as a reference to the Lakers’ purple and gold color scheme. DJ Khaled took pictures holding a Kobe shirt emblazoned with 1996, the year Kobe was drafted into the NBA. He noted, “it’s hard to even celebrate.” But they tried.

The show began with Keys and Boyz II Men (natives of the Philadelphia area that Kobe called home in his formative years) singing a passionate rendition of “It’s So Hard To Say Goodbye To Yesterday.” The performance was particularly poignant because it hadn’t been a full day since Kobe’s accident. They had to say goodbye today. The grief was still raw, and every vocalist put their all into trying to mirror the pain of the moment.

In a later Aerosmith/Run DMC performance, someone held a Kobe jersey up while the two legendary acts performed their rock/rap standard “Walk This Way.” Lil Nas X put a jersey on the set of his performance. Nas noted, “we love you Kobe” after his surprise performance with Lil Nas X. They were subtle nods that reflected their sense of duty to recognize Kobe’s legacy.

The night’s most evocative moment came during the Nipsey Hussle tribute performance, which ended with a powerful visage of Nipsey alongside Kobe. Both men are beloved LA icons who tragically died before truly getting to enjoy the fruits of their relentless labor. The side-by-side hammered home just how much LA had lost in the past year. Both men were fathers and companions who were seemingly just getting started as community leaders.

They were both active at LA’s Crenshaw high for a 2014 Trayvon Martin peace summit. The moment exemplified their willingness to be community leaders and use their visibility to amplify their convictions. Last night, the city of LA was able to amplify both of their legacies. During the acceptance speech for DJ Khaled’s “Higher” collaboration with Nipsey, John Legend noted that there was “so much tragedy to today,” and gave a powerful plea: “Let’s love each other, let’s love our family, let’s hold each other tight.” Both men would likely stand behind that message.

Artists take inspiration from myriad sources. It made sense that a room of people who knew all about hard work, sacrifice, ingenuity, and clamoring for the number one spot felt compelled to honor Kobe, especially in his arena. The Lakers and the rest of the NBA are surely prepping their own tributes. But the Grammy committee and show participants did a commendable job of celebrating Kobe on a sad Sunday night in LA. Now and forever, the prevailing sentiment is Alicia Keys’ closing message: “God bless Kobe’s family.”