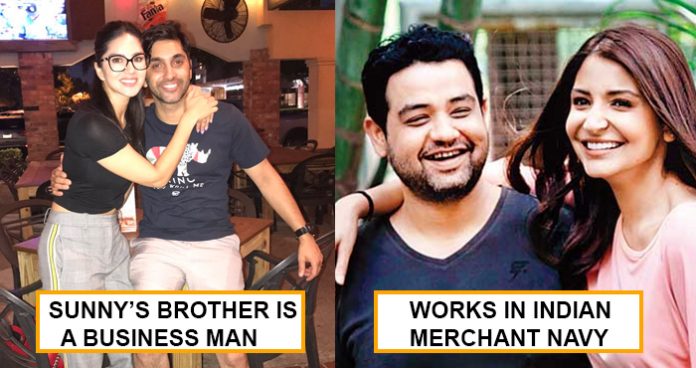 A brother-sister relationship is always special. We have seen these in numerous cases, in our lives.

Today we bring you 12 such celebrities who just cannot do without their brothers. Let’s go!

She has become quite famous after her back to back TV stints over the years. more than her acting skills, Mouni is on news for her face sculpting, fillers, and surgeries. She has been trying her luck in Bollywood for quite some time now. As for family and relationships, she has been quite open about them. Mouni has a brother names Mukhar Roy and he is a student. She often posts pictures with her brother and her fans really adore the siblings. Mukhar is quite a looker!

The very talented actor, she has an elder brother named Saqib Saleem. Both the siblings have made their share of place in Bollywood with their acting skills and their choice of films. They are seen to share screen space in the Horror movie Dobara. Dobara is an official remake of the Hollywood movie “Oculus”.

Sri-Lankan beauty and Bollywood actor Jacquline Fernandez has a brother named Warren Fernandez. Warren is an energetic person with a camera-friendly charm just like his sister. He is a TV professional. They are often seen together at parties and public appearances. A fan had shared a picture of them posing for the camera with Salman Khan.

Sunny Leone made her bold entry into

the international adult entertainment market years back. After that, she entered into Bollywood and created a controversy but was also successful to get a separate fan-base for her seductive and bold choice of films and their characters. Her real name is Karanjit Vohra and she has a young brother named Sandeep Vohra. He is a successful businessman. You should check out the various web series made on Sunny’s life where she talks about her relationship and equation with her sibling.

Gonna miss my bro @chefsundeep so much. The best 2days and much needed family time! Love you little brother! pic.twitter.com/d7LepCvMQM

She has made her names over the last decades with her cheeky presence and her bubbly public image. She used be the director’s favorite actor for years. She has a brother, Deepankar Zinta, who is a military officer.

Sushmita Sen the queen from the ’90s won the Miss Universe title before she debuted in Bollywood. Little do we all know that she has a younger brother who goes by the name Rajeev Sen. He is a Wing commander of the Indian Air-Force. he recently got married to a television actor, Charu Asopa.

Just like Rani Mukherjee, her brother Raja Mukherjee a.k.a. Raj is also a well known name in the film industry. He is a director and producer. He had been held in a lot of scandals and controversy for getting “unethical”. Here is a picture of the siblings with Aishwarya:

The Pahadi actor of Bollywood that we all adore for her charm, Anushka Sharma, she has a brother named Karnesh Sharma. She is very close to her brother. He works for the Indian Merchant Navy. Both siblings have surely made their parents feel proud of their achievements.

He is my best friend: Anushka Sharma on her brother Karneshhttps://t.co/F4Vl05M7k7 pic.twitter.com/O6LM222bN3

Another beauty queen from the early ’90s, Aishwarya claimed to fame for her intelligence, beauty and acting skills. She is popular globally and has also tried her luck in Hollywood. She has a brother, Aaditya Rai, who is now a very successful businessman.

Of late, Genelia has been focussing on the family. But she has been quite a talented artist and showed her acting skills in every character that she played in multiple film industries across India. Her TikTok account has a separate fan following who loves to watch being bubbly self. She has a brother, Nigel D’Souza who works for the Bombay Stock Exchange.

Urvashi is considered one of the glamorous personalities in Bollywood. She still yet to make it big acting-wise, but her bold camera presence and dynamic moves on various music albums have surely won the hearts of many. She is quite active on her social media handles and her fans love her posts. She has a younger brother Yashraj Rautela who is quite young and is currently pursuing academics.

How can we forget India’s global sensation, Priyanka Chopra? She has been on news ever since she made became the beauty queen followed by her debut in Bollywood. Be it her movie choice, scintillating camera presence, wardrobe faux pas, glamorous press release, tabloid covers, scandals, controversies, she has always made the headlines. As for her sibling, she has a brother, Siddharth Chopra. He is a successful businessman who has also started to co-produce films with his sister. he owns a pub called the Mugshot Lounge in Pune which was recently in a legal patch.

Siblings always make our lives a little better. Love them, hate them but you cannot do without them. I hope we all agree with that!