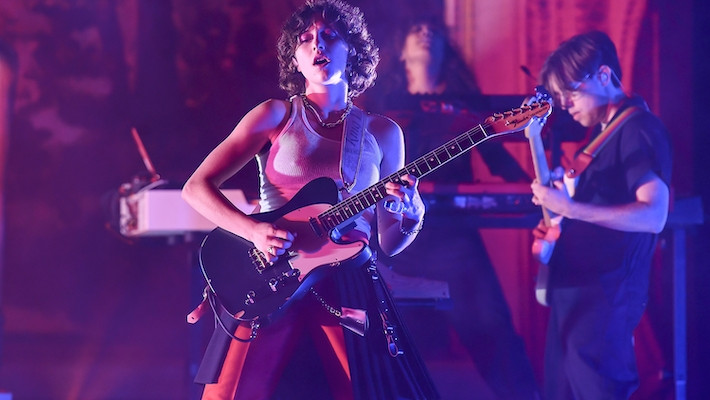 Mikaela Straus nodded from her perch on stage, satisfied with our obedience, and continued monologuing and vaping, chuckling a bit, perhaps at the juxtaposition of “miss” and “king,” one of the few bits of gender play she engaged in throughout the evening with open enjoyment. (Another: her skirt-over-pants combo.) At a pair of shows at The Wiltern in Los Angeles, Straus was loose, melodramatic, and wildly charismatic, assuring she’d never play a stage that size again, all while refusing to take the night seriously.

There was lots of monologuing on Friday night, as Strauss faced down a venue that’s far too small for her pop star potential. But with a sole album, Cheap Queen, which failed to produce a single on the level of her sweetheart-throwback debut, “1950,” KP exists in pop’s strange ephemeral in-between. Her mercurial, unchoreographed prancing around the stage is as fascinating and bewitching as the sleek phalanxes of backup dancers her would-be peers rely on, turning chaos into not just a force in her favor, but the force of her show.

As the lone femme figure (Straus identifies as genderqueer) commanding a band full of players, the relationship between King Princess and her band is on display along with her smoky, hazy, thick alto and introverted songwriting. Straus and the band are close — so close she playfully calls the drummer a “little b*tch,” went to sit on the piano player’s lap during a lull, and casually relates any gear malfunctioning back to the audience. It’s this kind of openness that’s almost jarring to experience from a pop songwriter, who are so often beholden to the kind of glossy orchestration that tends to strip out authentic personality.

Well, it’s impossible for me to determine whether or not the Mikaela Straus onstage is authentic, but if it isn’t, she’s done a better job at projecting an honest self than most songwriters of the last two decades. Both in her music and in her banter, Straus isn’t afraid to be butt of the joke (“Cheap Queen”) or admit her own complicity in situations that aren’t her ideal (“Ain’t Together”), especially when it comes to relationships. While she is a masterful lyricist and has a knack for melodies that don’t seem like they will be addicting, but surprisingly are, it would be a pleasure to listen to Straus detail her love life no matter what. The added layer, of course, is that it still feels magnetic and sharp to hear a woman openly singing about her love for another woman.

It’s not a new phenomenon, obviously, but in pop, it sort of is. Hayley Kiyoko and Straus are two of the only openly lesbian musicians making a major dent in the charts — though a spectrum of queerness has long been more accepted than the formal label of lesbian (Demi Lovato, Kehlani, and Halsey all spring to mind) — and huge Grammy nods for a queer woman in country, Brandi Carlile, indicates that even the more reticently conservative parts of America are coming to terms with women who love and partner with women only.

The tenderness, confusion, and longing that Straus brings to her songs take on new life when shouted, hummed, and sung back by a crowd that feels heard and seen, potentially for the first time. At just 21 herself, Mikaela is often singing to teenage fans, whether gay or straight, man or woman — or in the words of the immortal Billy Porter, still making up their minds — who see and feel hope for themselves in her success. Though her writing does address subjects like closeting (“Homegirl”), the songs are most often about the obsession, insecurity, and wide-eyed bliss that relationships can bring.

No matter how much queer artists are saddled with the extra burden and pressure of representation due to senseless, ongoing discrimination, it’s refreshing that Mikaela speaks and acts without the stickiness of inspirational speeches and pointed commentary. In their place, she sings with plain and unwavering grace, dances with the chaos, and goofs off with abandon. As the first artist signed to super-producer Mark Ronson’s Columbia Records imprint, Zelig, she has the room to laugh.

After finishing her own headlining tour, Straus is slated to open for Harry Styles in 2020, performing on those enormous stages she herself is clearly destined to tour. Maybe the songs she will write during that period of time, potentially even with Harry Styles, will make up the core of her next album. And what she learns from playing stages that large will undoubtedly inform it, too. And yet, even when it’s Madison Square Garden, I have a feeling she’ll still be vaping in between songs, demanding the audience address her properly: Yes, Ms. King.