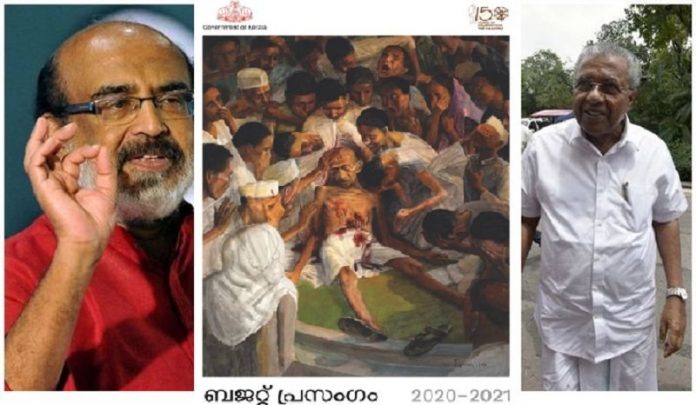 Kerala’s Left Democratic Front government led by Pinarayi Vijayan has released their official budget document for the year 2020-21 on Friday. The document has used artist Tom Vattakuzhy’s ‘Death of Gandhi’ painting on the cover page.

The document was presented among the members of the state Assembly after state Finance Minister TM Thomas Isaac ended the Budget speech which incidentally began with remarks against the Citizenship Amendment Act.

This idea of the Communist Kerala government of using Gandhi’s assassination picture for its budget document cover stirred a political storm, following which the Kerala Finance Minister Thomas Isaac came up with a justification, calling it a ‘political statement’.

“Definitely, it is a political statement, the cover of my Budget speech. It is a painting by a Malayalam artist of Mahatma Gandhi’s murder scene. We are sending out a message that we will not forget who murdered Gandhi,” said Isaac.

Taking a dig at the BJP government at the Centre for proposing National Register of Citizens (NRC), Issac further alleged that today history is being re-written and NRC is being used to divide the country into communal lines.

“This is important at the times when history is being re-written. There is an attempt to erase some popular memories and use the National Register of Citizens (NRC) to divide the population into communal lines. Kerala will stand united,” he added.

Kerala Finance Minister Thomas Isaac: This is important at the times when history is being re-written. There is an attempt to erase some popular memories and use National Register of Citizens (NRC) to divide the population on communal lines. Kerala will stand united. (2/2) https://t.co/RLEkCOrCDn

Critics of CAA and NRC have been misleading people by saying that their provisions are discriminatory and may be used to target Muslims, a claim which the government has time and again refuted. Pertinently, NRC and NPR are still in the proposed stage but the opposition has been using it as a tool against Modi government by spreading misinformation over it and misleading the citizens to fan their political agenda.

Read: Indian Muslims do not stand to suffer due to the CAA-NRC combo: Here are the laws and guidelines explained

NRC is an official record of those people who are legal citizens of India. The dossier includes demographic information about all those individuals who qualify as citizens of India as per the Citizenship Act, 1955.

The register was first prepared after the 1951 Census of India and since then it has not been updated until recently.