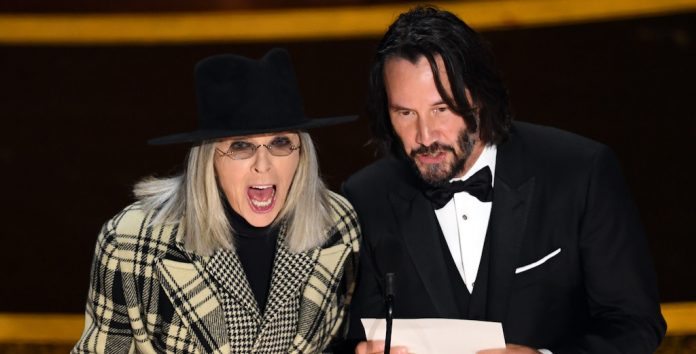 Just like last year, the 2020 Oscars had no host, but they made up for that with presenters. Lots and lots of presenters. Who needs Kevin Hart when you’ve got, let’s say, Keanu Reeves and Diane Keaton? The two were there to present the award for Original Screenplay, but before they called out the names of Team Parasite, the two got into a fair amount of banter.

And why not? The two are old friends. Back in 2003, they both appeared in Nancy Meyers’ romcom, Something’s Gotta Give, in which they nearly wound up together, until she wound up with Jack Nicholson. They had good chemistry then and they have even better chemistry now, with the two gleefully stepping over each other’s words, creating a beautiful cacophony.

They started by complimenting each other on their 17-year-old film, swapping “You were amazing,” before fondly reminiscing about reading the screenplay for the first time. Then it was memories of hanging with Nicholson, which Keanu called “a good time.” But Keaton stopped him there: “I wouldn’t go that far.” Whoa.

Keaton then almost opened the envelope before they’d announced the nominees, but Keanu was there to catch her.

People online flipped about the pairing, wishing they could be hanging with them, preferably with wine.

Some wished Keaton had ditched Nicholson for Keanu back in the day.

And many were thirsty.

“A man who’s matrix we’d all like to reload, Keanu Reeves”

Keanu certainly knows how to get along with the older ladies. His date for the show wasn’t his age-appropriate girlfriend but rather his mom.

Meanwhile, let’s all marvel at Keanu aging, and not that much, since the days of Something’s Gotta Give.