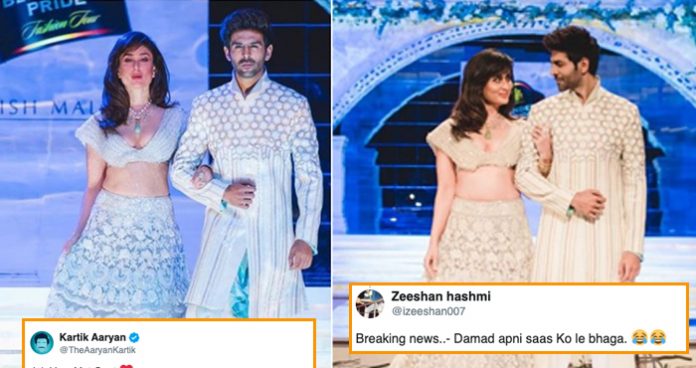 In this world of fame and blitz and glitz, which we know as our very own Bollywood film industry, the stars have to appear on and off the screen to promote their movies. Sometimes they have to appear in a talent hunt show, sometimes on a mega dance show, at times at a reality show or even in cricket matches, during the pre-match shows to promote their upcoming ventures. This trick is one of the most popular ones and in addition to the shows mentioned above, there are also fashion galas that are being added to the long list, where the film stars come and pose for the brands, sometimes with their co-stars and sometimes, with, errr… the mother of their co-stars!! Yes, something similar happened when the male lead of the upcoming movie “Love Aaj Kal”, Kartik Aryan, appeared at a fashion show and walked the ramp with the mother of his latest co-star, Saara Ali Khan. The event was organized by ace designer Manish Malhotra in Mumbai on February 1.

Kartik Aryan and Kareena Kapoor Khan, who is the wife of Saif Ali Khan, the father of Saara Ali Khan, walked the ramp together, which became the main centre of attraction for the fans of both the stars and took the social media platforms by storm. The netizens, especially the Twitterati went bonkers over the stunning pictures of the glamorous duo and made no attempt to show their appreciation on the social media platform. While a number of them praised the “Jodi”, there were many who trolled them as well. A few of the tweets are given in the following lines.

This was the main tweet, which started the fire, both on the ramp and off it.

The Twitterati provided their quick reactions on the picture, showing the two stars “together”.

Some of them trolled the pair viciously, reminding them of their age gap and termed them as “Saasu Maa” and “Daamad Ji”, which means mother-in-law and son-in-law, as Kareena’s step-daughter Saara will be playing the love interest of “Veer” (Kartik Aryan) in the movie “Love Aaj Kal”.

@saifalikhan bhai what is this ?

However, there were also truckloads of appreciation posts, with the fans of both the stars showering their love on them via their tweets.

The aforementioned comments show how important a part cinema or the stars related to it plays in the life of their fans. We wish the duo all the best for their future, especially Kartik Aryan, who is awaiting the release of his new movie “Love Aaj Kal” alongside Saara Ali Khan.