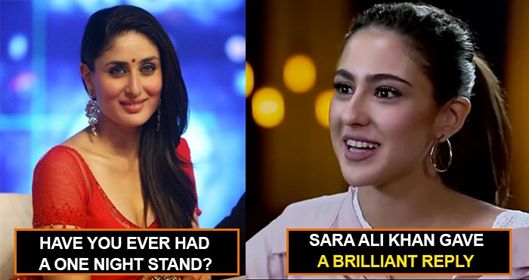 Bollywood actor Sara Ali Khan who is currently busy in the promotions of her upcoming movie ‘Love Aaj Kal’, was at her candid best on the latest episode of actor and step-mother, Kareena Kapoor Khan’s radio show ‘What Women Want’.

The episode featuring Sara Ali Khan revolved around contemporary relationships, where Kareena Kapoor Khan asked many candid and funny questions to Sara in the episodes, following which Sara made some interesting revelations when asked if she had done any of the given things in a relationship.

The first situation given to Sara was if she has done ‘ghosting’, to which the actress declined saying, “No, I haven’t done that. I reply to everybody. I reply to even those that you shouldn’t reply to. I’m one of those.” She further revealed that she has also never checked her partner’s phone or cheated in a relationship

Sara was asked if she ever sent “naughty texts” to her partner. Asking the question, Kareena added, “I don’t want to know this or I hope your father is not listening.”

Sara sheepishly replied in a ‘yes’ to this answer, after which Kareena asked, “Can I tell him?” Sara replied, “Sure, I mean he might watch it.”

Kareena Kapoor also asked her if she has ever had a one-night-stand and said: “I don’t think I should be asking you this question but I don’t know. I mean, we’re in a modern family. One-night stand?”

To this Sara Ali Khan replied “Never!” and Kareena breathed a sigh of relief.

Talking about her upcoming movie, Sara Ali Khan will be seen romancing her rumored boyfriend Kartik Aaryan for the first time in Love Aaj Kal. The movie is directed by Imtiaz Ali and is slated to release on February 14.

Besides Love Aaj Kal, Sara will also be seen in Coolie No.1 with Varun Dhawan and Atrangi Re with Akshay Kumar and Dhanush.