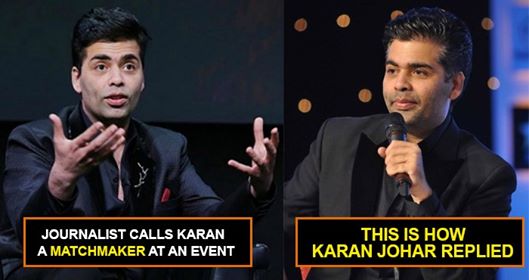 After scaring everyone with the first look of the trailer of the most anticipated movie ‘Bhoot Part One: The Haunted Ship’ starring Vicky Kaushal and Bhumi Pednekar in the lead role, was finally unveiled. The movie has been helmed has been by Bhanu Pratap Singh and produced by Karan Johar.

The movie is slated to release on 21st February 2020 and the people associated with the movie made their presence felt at the trailer launch event.

During the launch, Karan Johar, who has a reputation for linking actors and actresses, gave it back to a journalist for calling him a ‘matchmaker’.

Well, Vicky Kaushal was questioned by a journalist whether he has been linked with anyone by Karan Johar. Well this didn’t go down well with Karan Johar who came up with a savage reply saying:

‘Since when have you made me Shaadi.com. I am a creator, director but not a matchmaker. I don’t get involved in people’s personal life.’

To this Vicky Kaushal came up with a funny reply saying that he met a lot of people and to know all whom he met, everyone can see the trailer. He said:

“I have also met people. Did you not see who all did I meet in the trailer.”

“You just watch the trailer again and again and don’t ask anything else.”

Talking about Bhoot – Part One: The Haunted Ship revolves around the story of a couple who got trapped inside a haunted ship at the beach. And to everyone’s surprise, the movie is based on some true events which have already taken place in Mumbai some years ago.