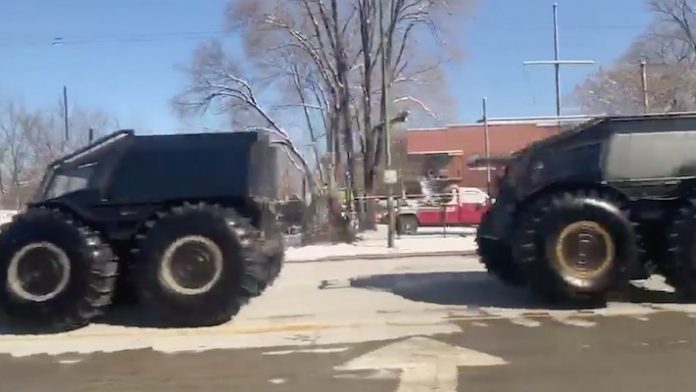 Despite the freezing temperatures in Chicago this weekend, sneaker heads are out in force chasing down a fleet of Sherp ATVs loaded with Kanye West‘s latest Adidas release. The Yeezy Quantum, which is dropping this Sunday, February 16 for $250 to coincide with the NBA All-Star Gameat select Chicago retailers, is apparently a hot commodity, worth braving the one-degree Windy City weather for at least. The ATVs pulled up at Wicker Park, Grant Park, and the West Loop to give away free pairs of the Yeezy Quantum, bringing with them the usual crowd that accompanies any of Kanye’s hypebeast-inciting shenanigans.

Ironically, West himself is not in the ATVs or participating in the giveaway, but he will be in his hometown this weekend for Sunday Service. This week’s edition of the traveling concert series takes place at UIC’s Credit Union 1 Arena. Tickets are sold out, but the secondary market loves reselling Kanye-related goods at a considerable markup — although with so many All-Star adjacent festivities in town, there are probably more fun things to do.

Meanwhile, the result of Kanye’s ATV-led giveaway were described as a “riot” but looked more like the usual assortment of sneaker heads, hypebeasts, and young adult Kanye fans who always clamor for anything (non-music-related) the Jesus Is King producer puts out these days — albeit a lot colder.

Check out video of the crowds chasing down the Yeezy ATVs above.