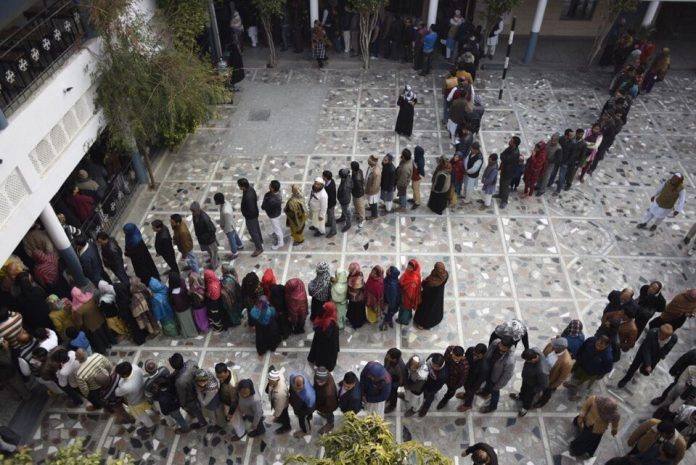 The Jamia Nagar and Shaheen Bagh residents, who were excitingly shouting ‘Kagaz Nahi Dikhayenge’ (We will not show documents) during the anti-CAA protests to oppose the Citizenship Amendment Act ironically queued up outside the polling booths with their voter cards on Saturday to cast their vote in the Delhi assembly elections.

According to ANI, a large number of Jamia Nagar residents thronged outside polling booths in Delhi as polling for legislative assembly elections got underway. Muslim-dominated Jamia Nagar falls under the Okhla constituency.

Delhi: Voters queue outside a polling booth in Jamia Nagar as polling for legislative assembly elections is underway pic.twitter.com/d8vqZVd0Xv

The Muslim mobs which had hit the streets during the anti-CAA riots in December had earlier vowed to not co-operate with the government by submitting their documents in case if it was necessary for updating National Population Register (NPR).

Some people had even claimed they do not possess any valid documents to submit to government authorities while some had shouted slogans of ‘Hum Khagaz Nahi Dikhayenge’ to assert that they will flout rules by not submitting documents as a form of protest against the Union government.

However, it is ironical to see that the Jamia Nagar residents have queued up outside polling with their valid ids to cast their vote in the Delhi polls.

Interestingly, Aam Aadmi Party, which is being accused of instigating riots in Delhi ahead of the assembly elections, has fielded controversial AAP leader Amanatullah Khan from the Muslim-dominated Okhla constituency.

There have been serious allegations against Delhi Chief Minister Arvind Kejriwal-led AAP and senior leader Amanatullah Khan for instigating riots in Delhi by inciting Muslim mobs against the Modi government ahead of the Delhi assembly elections under the guise of protesting against the Citizenship Amendment Act, which has nothing to do with Indian Muslims.

Long queues have also been seen at Shaheen Bagh of people out to vote in Delhi elections, just about a kilometre away from the Islamist protests being held against CAA and NRC.

Less than a km from the protest site. People coming out in large numbers to vote. #DelhiElections2020 pic.twitter.com/e2Wsp5A4gx

Shaheen Bagh has been the epicentre of anti-CAA and anti-NRC protests after the riots by Muslims mobs subsided. Several Islamists from Shaheen Bagh have also said that they don’t have documents and have alleged that they will not show their documents to the government.

On Friday – the eve of Delhi elections, the Muslim clerics from riot-hit Seelampur and Okhla had issued to diktats to Muslims to visit voting booths in large numbers to cast their votes. It seems that the residents of these areas are now strictly following diktats passed by the clerics.

In the run-up to the Delhi Assembly polls, Muslim-dominated areas of Seelampur saw unprecedented violence led by Muslim mobs to protest against the Citizenship Amendment Act. Even Delhi’s Jamia Nagar, which comes under the Okhla constituency in East Delhi parliamentary segment, was one of the epicentres of the anti-CAA riots.