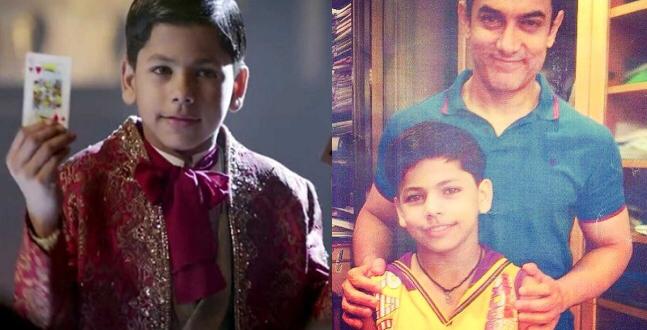 The performance delivered by Aamir Khan in Dhoon 3 was praised by fans as well as critics. There’s no doubt that Dhoom 3 is one of the biggest blockbusters in Bollywood. However, you can’t give the whole credit to only Aamir Khan for the success of the movie.

Do you remember the cute kid from the movie Dhoom 3, who had played the character of young Aamir Khan?

He stole the show with powerful performance and his gymnastic skills by playing the character of Sahir and Samar. Even Aamir Khan came forward to appreciate the performance of the young actor.

The character of Young Aamir Khan was portrayed by Siddharth Nigam in the movie. The actor has started his career as a child artist in the entertainment industry by featuring in the Bournvita advertisement.

Siddharth Nigam is very popular on his social handles that
show his immense fan-following. For instance, the actor has 3.9 million
followers on his Instagram account.

Let’s know the actor better with his history and career graph.

1. Siddharth Nigam was planning to be a gymnastic

Siddharth Nigam was born on 13th September 2000. He has worked in many Bollywood films, ad commercials, and Indian television series as well. Siddharth is best known for his portrayal of Sahir/Samar in Aamir Khan’s Dhoom 3, and young Emperor Ashoka in Chakravartin Ashoka Samrat.

Siddharth is currently seen as Aladdin in the show ‘Aladdin – Naam Toh Suna Hoga that broadcasted on Sab TV.

Siddharth has done his early schooling from Khelgaon Public School in Allahabad, Uttar Pradesh. It was the time when he practiced gymnastics. Later, Siddharth shifted to Mumbai.

He has won the gold medal in parallel bar and silver medal in the high bar at the 58th National School Games in Pune. Little you know that his mother runs an NGO and a beauty parlor.

At first, Nigam wanted to pursue his career in gymnastics.
He was also selected on the national-level gymnastics and he won a gold medal
too. His acting career started when he featured in the Bournvita ad. That ad
leads him to the audition room of Dhoom 3.

The director Vijay Krishna Acharya said that Nigam was selected when makers saw the advertisement of the Bournvita.

He auditioned for the role and then played the twin Sahir and Samar in the movie Dhoom 3 which was released on 20th December 2013.

Siddharth Nigam was appreciated by many critics. For instance, Taran Adarsh from Bollywood Hungama said, “Siddharth Nigam is a talent to watch out for. He’s superb!”

Suhani Singh from India Today commented, “He lights up the screen with his self-assured performance and charming presence.”

After making the praiseworthy debut in Bollywood, Nigam was approached for the television and he took the role of Young Rudra in the mythological drama series Maha Kumbh: Ek Rahasya, Ek Kahani.

The show started on 15th December 2014 and used to air on Life Ok channel.

In Feb of 2015, Siddharth Nigam got the meaty role in the historical drama series Chakravartin Ashoka Samrat where he played the lead role of Young Ashoka.

Nigam got a lot of appreciation and award for this awesome performance as Ashoka on-screen.

4. Siddharth won many awards for his television performances

Siddharth Nigam continued to feature in television series. He was the guest in the special Mahashivratri episode on k9 Productions comedy show Comedy Nights with Kapil.

After a year, in 2016, he participated in the celebrity dance reality show Jhalak Dikhla Jaa 9. Later on, he played the character of young Shivaji in Peshwa Bajirao.

In 2017, he played the character of Bindusara who was the
son of Emperor Chandragupta Maurya in the series Chandra Nandini. Currently, he
is doing the serial Aladdin in Sab TV’s Aladdin—Naam Toh Suna Hoga.

Apart from his tv serials, Nigam featured in numbers of
music videos. The latest is ‘Luck Di Kasam’. He has also launched his music
label BonBros Records in a partnership with his brother Abhishek Nigam.