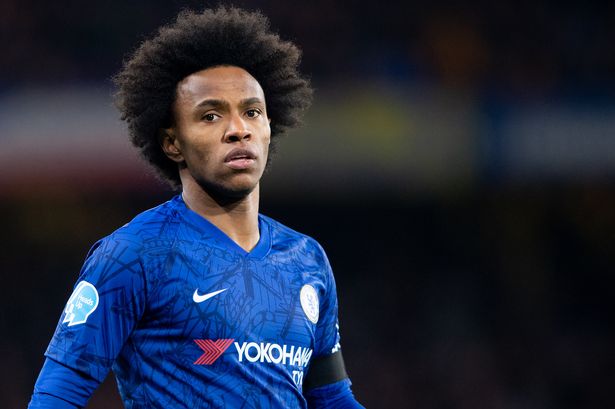 Jose Mourinho can finally make his dream come true and sign Willian this summer from Chelsea.

The Special One was desperate for his signature at Manchester United in his final year.

The Brazil international was a disciple of his at Chelsea and the two remain in contact.

Mourinho and Ed Woodward clashed multiple times at United over signings and Willian was said to be one of them.

While the Portuguese coach demanded his signing, Woodward was not so keen.

And he was so keen on the Chelsea winger that he was prepared to axe Anthony Martial – another decision that did not go down well with Woodward.

Ultimately, the Old Trafford chief had the last laugh and sacked Mourinho only months later.

Now the ex- Real Madrid coach is working under Daniel Levy at Tottenham with the situation very different.

Willian will see his contract expire at the end of the season and plans to renew have stalled.

Stamford Bridge chiefs are only prepared to extend his deal by two years while Willian wants three.

The stalemate could see both parties fail to come to a decision, meaning he could leave for nothing.

The former Shakhtar star has even hinted that he could join Spurs after admitting he still regularly talks to Mourinho.

“People ask me about the best coaches I have had. For sure, Mourinho is one of them.

“We had a special relationship. He demanded a lot, so there were some conflicts, but that’s normal.

“He would challenge me and call out my mistakes, but if I had played well he would also say something like, ‘today you killed it’.

“I loved his man-management, how he organised training, how he spoke in meetings. I learned a lot from him.

“Even after he left Chelsea he spoke well of me. We are still friends. Sometimes we exchange messages.

“When he was at Manchester United he wanted me to go there. And the way in which he made that clear was always respectful.”