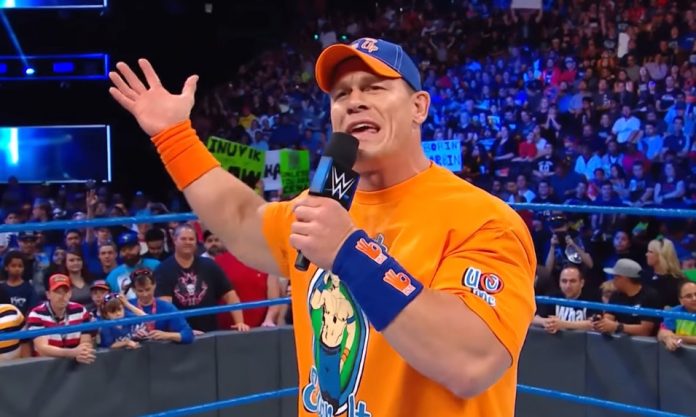 Lately, John Cena‘s only appearance on WWE television has been during Raw commercial breaks to tell us how to improve our credit scores. If you’ve been missing him in the ring, here’s some good news: The Face That Used To Run The Place has been announced for this week’s Friday Night Smackdown on Fox.

From the official announcement:

John Cena will return to SmackDown on Friday, Feb. 28, as Team Blue continues down The Road to WrestleMania.

It was on SmackDown where The Cenation Leader made his dynamic debut nearly 18 years ago, when he channeled “Ruthless Aggression” to challenge WWE Hall of Famer Kurt Angle in his debut match. Since that fateful night, Cena went on to become WWE’s standard-bearer, earning 16 World Championships and inspiring countless WWE fans to “Never Give Up.”

An icon in the ring and the star of such blockbuster films as “Bumblebee,” “Blockers” and the upcoming “F9: The Fast Saga,” Cena will soon bring his signature “Hustle, Loyalty and Respect” back to SmackDown, as first reported by WWE Backstage on FS1. Whatever this unparalleled Superstar has planned, you won’t want to miss it.

No word yet on what Cena will do on the show other than making a “fine speech,” but with rumors of “something substantial” in the works for WrestleMania, this could be the first step of a big springtime program. Or he’s there to show us a new trailer for F9.

Either way, it’s good to have you back (for an episode), Big Match John.