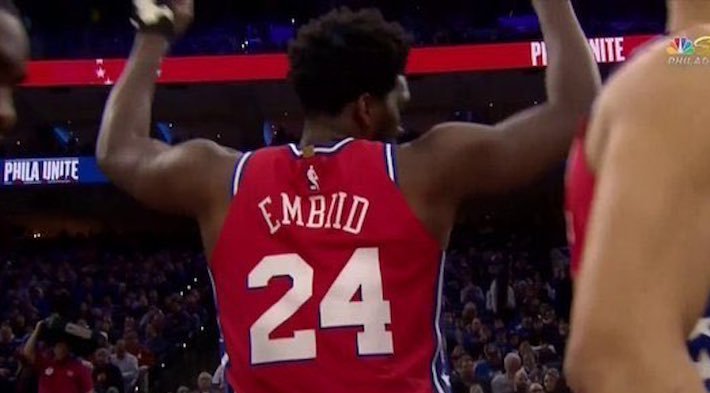 The basketball world is still in a state of mourning following the untimely passing of Los Angeles Lakers legend Kobe Bryant. A helicopter crash on Sunday tragically took the lives of nine individuals, including Bryant and his daughter, Gianna. Tributes have been pouring in ever since the accident, with one coming on Tuesday evening courtesy of Philadelphia 76ers big man Joel Embiid.

The Sixers are playing hosts to the Golden State Warriors on Tuesday, meaning the team is taking the floor in the city that Bryant called home during his high school career. There have been tributes in the arena, like a logo with the number that Bryant wore during his days as a star at Lower Merion High School and a moment of silence for those who passed in the crash. We also got something that has become commonplace in recent days, as the Sixers took an eight-second violation and the Warriors ran out the 24-second shot clock on their opening possessions.

You may have noticed at the start of that video that Embiid, who normally wears No. 21, had a 24 on his uniform. That’s because the big man, who famously got into basketball because he was captivated by Bryant, switched his number for the game.

As Kyle Neubeck of Philly Voice pointed out, the number is retired by the Sixers in honor of Hall of Fame inductee Bobby Jones. However, Embiid, called Jones and asked for permission, with Jones giving the go-ahead for Embiid to wear the number.

Joel called Bobby Jones, whose No. 24 is retired in Philadelphia, this afternoon in order to get his blessing to make the switch, and Jones offered his full endorsement after they shared some hoops memories https://t.co/HBqTsUObWr

This isn’t the first time we’ve seen a jersey-related tribute to Bryant in the last few days. Hawks star Trae Young wore No. 8 for a spell on Sunday, while a pair of players, Nets guard Spencer Dinwiddie and Magic guard Terrence Ross, both wore No. 8 but have changed their numbers. Mark Cuban has said the Mavericks will retire No. 24, and there have been some calls for Bryant’s numbers to be retired league-wide.