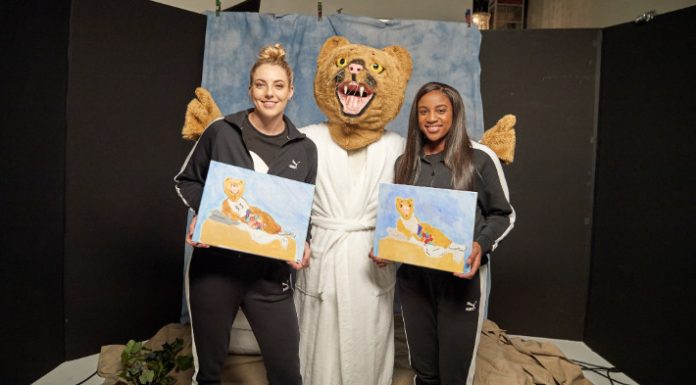 Jackie Young and Katie Lou Samuelson were the first and fourth picks in the 2019 WNBA Draft after collegiate careers that included national titles at Notre Dame and Connecticut, as well as Final Four battles against one another. Their recently-ended rookie years featured another high-profile matchup in arguably the game of the season as Young’s Las Vegas Aces defeated Samuelson’s Chicago Sky in the second round of the playoffs.

Now, the two are linked up once again as members of the Puma family. The pair spoke with Dime about filming their first Puma promo, which drops on Thursday, among many other topics.

What drew you to signing with Puma earlier this year?

Jackie Young: I just knew they were a good choice for me, just the freedom that they let us have, the way they let us embrace ourselves, embrace the brand, and do a lot of different things. I know Puma was really making a big jump into the basketball world, so I knew that would be a great fit for me.

Katie Lou Samuelson: For me, it felt like they were doing something different than anyone else and it felt like they really had a good plan, and they embodied what I wanted and felt as a player. It kind of was mirrored for me in a sense, this was new in my whole career and a step forward, and them coming back into basketball was a step for them.

What has been your favorite Puma sneaker to play in so far?

Young: The Uproars, definitely the Uproars. I played in them all season and still working out in them.

Samuelson: So far, I’ve loved playing in the Uproars. They have a really good grip, and it’s just been really comfortable. I’ve never had to break them in, so I’ve been able to play in them when they’re brand new. Off the court, one of the favorites is all of the RS styles in general they’ve made. I like that you can have so many different colors and so many different kinds of them, and they’re all kind of unique in their own way.

What’s it been like filming your first video spot together for the brand?

Young: It’s been pretty cool. This is like something you think of when you’re a little kid, and now you get to actually do it. They make sure that we have fun doing it, we have to just express ourselves, but I had a lot of fun doing it.

Samuelson: It’s been a lot of fun. It’s been pretty crazy to be a part of this and included in things like this because that’s not common for all women’s basketball players. So them including me and Jackie in stuff like this is pretty amazing.

Although you guys played for rival colleges, do you feel some connection as part of the same draft class or being part of Puma?

Young: I mean, I guess in college it’s a rivalry, but we’ve never had any problems or anything, we’re always fine when we played against each other. I just think being with Puma, I think that’s made us closer. We both signed with Puma, being together at events, just being able to rep the brand, I think that’s brought us a lot closer.

Samuelson: Absolutely, I think once we both signed here, especially them not having that many women’s basketball players at first, you feel that connection. You feel kind of empowered together going in that step forward because you don’t see that many players around the league being able to wear stuff like that, so it’s exciting and it’s kind of cool to do that together.

Is the Notre Dame-UConn rivalry still there?

Samuelson: I think that’s always there. I don’t think it’s necessarily in the league, I think more so when UConn and Notre Dame play each other again, that will come up more. But I think it’s different when you’re in the league and playing because you can’t necessarily bring that up every game.

Is there still camaraderie among the Notre Dame/UConn players in the WNBA, even when you’re on different teams?

Young: Yeah, of course, we all still keep in touch, check in with each other to see how everyone’s feeling.

Samuelson: Absolutely, I think there’s definitely a connection between all the UConn players in the league and everyone that’s kind of been through Connecticut together, you just have that connection just based off of that. For me, going to Chicago and I played with Gabby [Williams] at UConn but I never played with Stef [Dolson], but since she had been there it was easy for her to kind of help me out, it was easy for me to go to her when I needed help and stuff just because of that connection there.

What are some lessons you take from your rookie season?

Young: I think just learning what works for you. You’re a professional now, so you have to figure out what works. In college, you’re pretty much on a schedule every day, everything is planned out for you, so I think it’s just figuring out what works for you, just trying to take care of your body and get the most out of what you can learn from the vets. I think that’s the biggest thing for me is just asking a lot of questions and just trying to find out the most I could learn in my rookie season.

Samuelson: I think one of the major things is just knowing that you can improve in all different aspects of your game and just to keep working, and you want to keep getting opportunities and keep getting chances to show people what you can do.

What was the adjustment like on the court from college to the pros, specifically fitting into a smaller role?

Young: [The Aces] did a great job of welcoming me just being a rookie. As soon as I got here, A’ja really took me under her wing and we became really good friends. She really helped me a lot. Talking to the vets, they made me just feel comfortable and feel comfortable in my role.

Samuelson: I feel like for me, I broke my wrist at the beginning of the season, and it was a little hard to get into the rotation after that. It was definitely a different role that I played on that team, but whatever role that you’re put in as a player, you want to do the best that you can at it.

What’s something that you personally want to improve on in your second season?

What was going through your head when Dearica Hamby hit that shot?

Young: It was so crazy. I remember she got the steal, it just happened so fast, she got the steal and then she just threw up the shot and it went in. We were just like, ‘oh my god no’, and then we were cheering for her. But that’s definitely something that would happen to Dearica, and we’re just super glad that she hit the shot.

Samuelson: It was a crazy game.

[Note: The majority of WNBA players play overseas at one point or another, and Young and Samuelson had to reckon with that decision. Samuelson went to France to play for Flammes Carolo immediately after the season ended, but is currently back in the United States working out with Team USA, which played at her alma mater Monday. Young took a more non-traditional path and has been playing 3-on-3 basketball for Team USA. She went to the World Beach Games in Qatar in October and has more tournaments lined up in 2020.]

What factors into that decision whether or not to play overseas?

Samuelson: I think most players, you look at the opportunity to make more money, the opportunity to continue to play since the WNBA season is such a short part of the year, so there are a bunch of things that factor into it. I know everyone, I’m sure, would much rather be able stay at home and do what we can just to be able to go by with that, but sometimes you gotta do more. And right now, overseas is where a big part of women’s basketball is.

I think it’s been good for me, especially going straight from college into WNBA and then going into France, I think for me it’s been a nice needed break to kind of regroup and focus on what I want to focus on.

Young: I played 3-on-3 for USA in Qatar. I had a really good experience with that, I mean we didn’t win, but overall personally I had a good experience. I just really liked the game of 3-on-3 and how fast-paced it was. I got another opportunity to go play in Pittsburgh for another 3 on 3 tournament [in December], so I just really like how fast-paced it is, just getting to play your game really.

How do those skills translate to the WNBA?

Young: You have to play good defense, I think it makes you a little bit more disciplined on defense. Knowing that you only have a 12-second shot clock, it’s really playing in crunch time, but you’re just doing that in every possession for 3 on 3, so I think it just gets you ready and disciplined to play late in the shot clock. It helps you become more of a scorer, just showcase what you have and just be able to play confident whenever it comes back to playing for your team in the league.

Do you hope to play 3-on-3 in the Olympics in the future?

Young: That’s the goal, ultimately that’s the goal. We’ll see. I’ll just keep playing in these tournaments and try to get to the top 10.