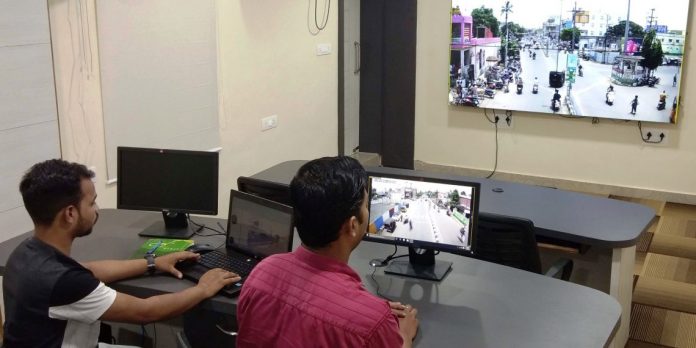 Berhampur: In a unique move to streamline vehicular movement in the city, identify traffic violators and make the Silk City clean, the Berhampur Municipal Corporation (BeMC) has implemented an Integrated Traffic Management System (ITMS) and City Surveillance rule in Berhampur of Ganjam district.

After successful implementation of ITMC, the traffic police and RTO will be able to collect lakhs of fines from traffic violators through e-challan system.

According to sources, the BeMC had launched the project initially at Tata Benz Square, PVN Rao Petrol Pump, Kamapalli Square, Gate Bazar and Courtpeta area in the city to implement the ITMS on a trial basis. Under this system, CCTV cameras and Automated Solar Lights were installed at signals.

The system is monitored from BeMC office while the live feed is inspected at Police Headquarters and RTO. Subsequently, the traffic rule violators are spotted along with their vehicle details and then are penalised, added sources.

The control room is providing a 24-hour control room. The system can automatically take the photographs of commuters violating speed light, wrong side driving and red light. The system is connected to ‘e-Vahan’ and the penalty challan would be sent to the violator’s address by the RTO.

From January the ITMS system has been installed at 24 busy streets like Fast Gate, Lanjipalli Bypass, Bijypur, New Bus Stand, Haridakhandi Chhak and Subarao Chhak. The above areas are also included in the City Surveillances System.

BeMC Commissioner Chakraborty Singh Rathore said the ITMS is being installed at a cost of Rs 3.9 crore, and that BeMC has spent Rs 40 lakh to Rs 50 lakh for its smooth management.

Chakraborty said under City Surveillances system, citizens and shopkeepers of Berhampur city were asked to use dustbins and not use polythene through various programmes. Despite that, about 47 shopkeepers were penalized and Rs 2.5 lakh collected towards fine for violating the rule, added Chakraborty.

Sarthak Rai said the residents of the city were made aware of traffic rules during road safety week.  However, Rs 25.76 lakh has been collected from riders for violating the traffic rules through ITMS system.

Besides fine collection, the RTO has suspended licenses of 53 riders for violating traffic rules.

“The new initiative of the BeMC is really helpful to maintain civic rule in the city. The general public is getting various benefits through this method,” Asit Kumar Sabat, a local said.