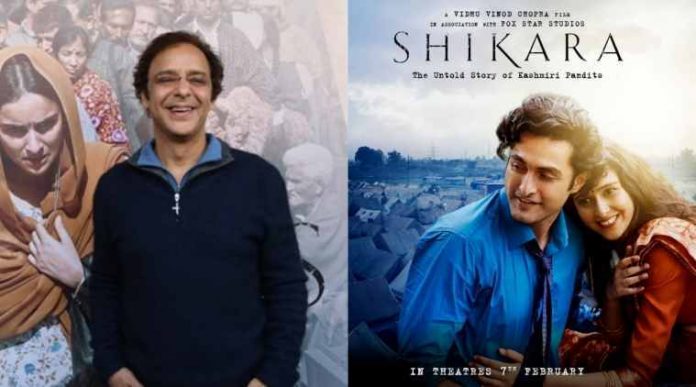 Movie Shikara is another stab in the hearts of Kashmiri Hindus who after 30 years in exile are still anticipating for justice. It is a movie which very simply ignores our genocide, Jihad in the valley, militancy and radical Islam because of which Kashmiri Hindus were forced to either leave, convert or die.

Since all Kashmiri Pandits/Hindus were nationalists and staunch followers of the Sanatan Dharma, they decided to flee from their own homeland to protect their dharma and survive. This was not at all easy decision. It was not taken by some intellectual discourse but series of murders, gang rapes, torture against Hindus in the valley by their own Muslim friends, neighbours and locals of the valley. It was a genocide in independent India by armed Muslim local population against the helpless Hindus.

Kashmiri Muslims received armed resources and training in Pakistan. It was Pakistan that was the mastermind of making Kashmir as the Islamic state and that could not have been achieved in the presence of native Hindus of the valley. So, at the stroke of midnight on 19th January 1989, slogans were raised from the loudspeakers of masjids for all Muslims to gather in thousands on-road and declare Islamic Jihad in the valley. Kashmiri pandits were butchered, women were abducted and gang-raped, bodies were cut into pieces and the local Muslims used to piss on them and shout none to touch to do end rites otherwise they will meet the same fate.

Terror was upon Hindus of the valley and the only option left was to flee from there and the only help came to Kashmiri Hindus was from then Governor Jagmohan, Indian Army and post exodus, BJP and Bal Thackeray (Shiv Sena) who helped us rehabilitate in other parts of the country.

The biggest salt on our wounds was the selection of Muslim lead roles for the depiction of Kashmiri pandits plight. I have nothing against the lead cast but they don’t even know and understand what happened to us. We, Kashmiri Pandits minority were persecuted by Muslims majority in the valley because of our religion. Kashmiri Hindus have lost that trust on them and when we see movie director selects both lead casts who are in real life Kashmiri Muslims, only adds up our pain. It was pure politics to appease Muslims on the pretext of Hindu genocide and while the actors are not at fault, it was almost a calculated move by Vidhu Vinod Chopra to add an element that helps in watering down the genocide.

Nevertheless, we hoped that movie will at least depict something from the reality but it was to my astonishment that movie came out to be anti-Hindu (filled with Hinduphobia) and portrayed our country in a bad light at the time of the exodus. From the very first scene in the movie, it is shown that the Kashmiri pandit character is writing letters to the President of America and asking to understand Kashmiri pandits plight and solve it. On the subtitle of the movie, it was written that nearly 1664 letters have been written to the president of America regarding our plight, a plight which was not even touched in the movie.

This scene depicted that we Kashmiri pandits had no trust in Indian government or constitution, the moviemaker has portrayed our community against the identity of India which is mere propaganda. Kashmiri Hindus/pandits are today surviving, living and contributing to the country because of the Indian Army and because we believe in the Indian constitution and consider ourselves as Indians. However, this is not the case with Kashmiri Muslims who don’t identify themselves as Indians and they always considered Indian government, constitution and army against them because of Pakistan’s influence of jihad. So, what I figured out was that movie maker had clearly injected a conspiracy against Hindus to defame them and also fire the jihadi tactics keeping the gun on Kashmiri Hindu character’s shoulder.

Moving on, there is one scene where another Kashmiri Hindu is seen saying that this whole problem of conflict (no mention of religion, jihad etc) is because of the supply of guns from the America to Afghanistan which has created problems in the Kashmir valley (totally ignoring the mastermind of jihad that was Pakistan). This only whitewashed our religious genocide. Then there is another scene where a Kashmiri pandit is gun downed by “thin air”, yes, who shot him is still a question.

The movie does not show any Islamic radicalization, jihad, and on top of it they only showed one Kashmiri pandit murder that too without any “human” intervention (totally ignoring the militancy). Another scene in the movie shows again from “thin air” some bullets killed three policemen in front of the lead female actress. She is shown in fear and runs to home, in the next moment only we see her smiling because the doctor did check-up, declared she is fine. This is how subtly movie maker just changed the emotion of terror into happiness, oh let me correct myself, into an emotion of love because after all, it is a love story depicted by two Kashmir Muslims as Kashmiri pandits in the movie. What a slap on us! Story of Kashmiri pandits can never be a love story. Our genocide was not shown, the whole movie was as I quote Sushil pandit ji,” a huge coat of secular varnish & a genocide romanticized”.

This movie moves on to show Hinduphobia in a scene where a Kashmiri Hindu refugee kid around 8-9 years old is shown to speak slogan like, “mandir to wahi bane ga, masjid per” (refereeing to the Ayodha movement). However, never in the movie, we see any Islamic slogans or jihad or militancy, nothing! If this is not anti-Hindu conspiracy then what it is?

Each time characters smiling in the movie only tried to ignore the pain of genocide and propagated their love story which had nothing to do with Kashmiri Hindus genocide. Another scene is shown at the end of the movie, that Arti another Kashmiri pandit character and “good human being” Latif who is a Kashmiri Muslim, who was very progressive, cricketer by profession ended up in some “mistakes” because state violence killed his father. The secular Latif had no angle of love jihad as there is nothing like love jihad. He just happens to kill a family of Kashmiri pandits in which she was also there. It was a mistake only. Yes! Here comes the secular hero of the movie, the lead actor as Kashmiri pandit listening to all this and smiling and saying I have come to see my “DOST” and he does not care about Indian Army.

In the end, I just want to say, this movie is indeed pure love story but had no connection with Kashmiri pandits genocide and exodus. There was not even one scene depicting jihad, Islamic radicalization and how Kashmiri Hindus were persecuted. It has indeed secularized Hindu Genocide in Kashmir. Refugees from Jagati camps were merely used as the props. Movie Maker played with the emotions and sentiments of Kashmir Hindus to just mint money. The movie is a big conspiracy to spread Hindu Hate and Anti India venom. This has made our struggle to get justice bumpier than never before. This movie mocked persecuted Hindus of the valley and the party which helped us to rehabilitate. In the end, I just want to say, there was no Azaadi slogan shown and neither we Hindus have received any Azaadi from such people’s betrayal.

(This article has been written by Divya Razdan who is a journalist & researcher. She is also an Associate Member at IDSA)