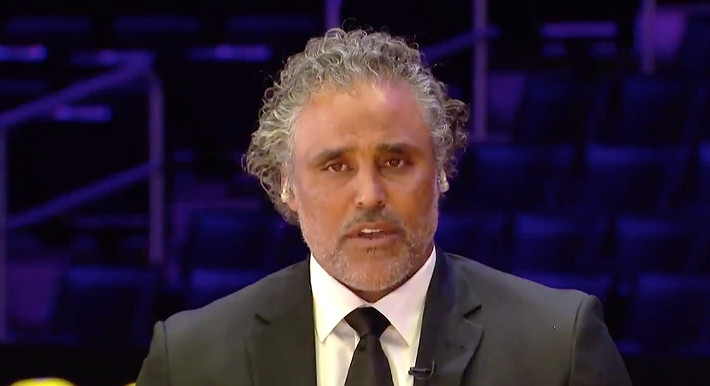 As is the case whenever a major breaking news story happens, there was a ton of inaccurate information flying around in the immediate aftermath of the news of Kobe Bryant’s death in a helicopter accident on Sunday. Notably, there was a rumor that all four of Bryant’s daughters were with him on the helicopter, which ended up not being the case, although his daughter Gianna was among those who passed away.

There was also a rumor that one of Bryant’s former teammates, Rick Fox, also was on the helicopter and did not survive the crash. That was eventually confirmed to be false, but for a period of time, the news circulated on Twitter of Fox’s death. He put out a tweet on Sunday about the crash, and on Tuesday, Fox discussed being at the center of these rumors on Inside the NBA‘s tribute to Bryant.

Fox explained how unsurprisingly difficult it was dealing with this, especially in the aftermath of Bryant’s death. He recalled talking and spending time with his children, at which point his “phone started going off.”

“I’m thinking to myself, ‘Everybody wants to talk about Kobe,’” Fox recalled. “And I, right now, want to be with my kids and my family.”

Fox then mentioned that he got called by King Rice, his best friend and a former teammate at the University of North Carolina. As he explained, Rice, the head coach at Monmouth University, walked off the floor following the team’s game against Iona, at which point someone told him that Fox may have been involved in the helicopter crash.

“He started calling,” Fox recalls. “So I’m seeing King’s number repeatedly going and going and going, and I think he’s worried about me, so I said, ‘I’m gonna talk to my best friend.’ I answered and I said, ‘Hey, man, this is crazy about Kobe,’ and he just was bawling. And I started crying, and he was like, ‘You’re alive.’”

At this point, Fox’s phone began “going,” with his mother, sister, and brother among those reaching out to make sure he was OK. He went on to say that the whole thing was “a lot to process,” and that, “It was hard to deal with, because it shook a lot of people in my life.”

Fox wasn’t the only person who spoke about the emotions they felt in that moment — Kenny Smith needed a moment after telling everyone what happened after he learned Fox was safe.

Kenny Smith get extremely emotional while telling story of when he found out Rick Fox was still alive despite reports at the time saying he was dead. pic.twitter.com/lfQWoC2sim

There is an obvious critique that can go here of social media and those who use it to maliciously disseminate false information, which leads to pain and suffering that hits people far harder than any sort of endorphin rush that can come from retweets, likes, or anything else. But instead, we’ll just say that we’re all happy Rick Fox is safe, and our hearts go out to him and his loved ones who heard that he passed away and were stuck in a state of uncertainty for longer than anyone ever should be.