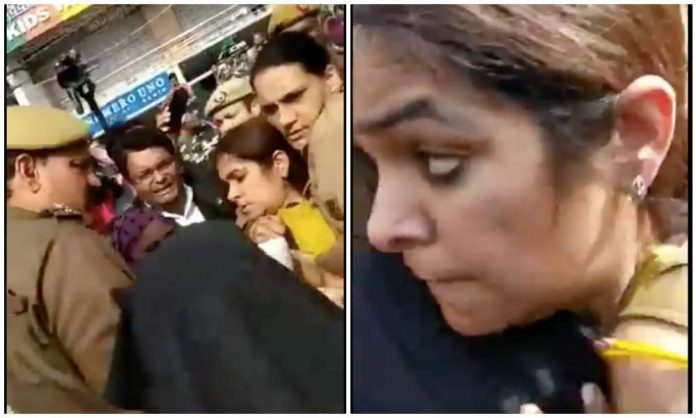 Political analyst Gunja Kapoor, who was recently hounded by an unruly mob baying for her blood at Shaheen Bagh, took to YouTube to narrate her ordeal. Sharing a video on her YouTube channel, Right Narrative, Kapoor narrates how the entry at Shaheen Bagh requires you to show ‘documents’.

Gunja says that she visited Jamia as well as Shaheen Bagh and the way she was heckled and mistreated at both these places, she is forced to believe that the only reason behind this ill-treatment is that she does not possess a ‘visa’ for both these places. Going to Shaheen Bagh, which has metamorphosed into an island nation of sort without adequate references and a ‘visa’ of sorts can get you lynched, she said.

“I am not Sharjeel Imam who made a clarion call for Muslims to cut-off Assam from the rest of India through his anti-national speech, nor am I one of those anti-nationals who under the guise of being an Indian raise ‘Pakistan Zindabad’ slogans” or ask for ‘Jinnah wali azaadi’,” Kapoor says in her video.

It is pertinent to note here that the protest at Shaheen Bagh, which has been raging on for weeks has exposed itself to be deeply Islamic and anti-Hindu in nature with posters like F*ck Hindutva that distorted the Om symbol to several slogans like ‘Pakistan Zindabad’ and ‘Jinnah wali Azaadi’, that exposed the Islamist mobs’ deep-seated hatred for Hindus.

Read: NGO linked to George Soros, who had declared war against ‘Nationalists’ and PM Modi, calls for people to join Shaheen Bagh protests

She then goes on to explain why she felt the need to wear a burqa to Shaheen Bagh. She says that she chose to wear one because she felt insecure due to past experiences and wanted to keep safe. She recollects how a few days back, a woman journalist for Republic TV, who just went to do her job, was heckled and assaulted at Shaheen Bagh.

Gunja divulged that she also met a similar fate at Jamia when she went there with senior journalist Bhupendra Chaubey for a debate. The leftist and Islamist mob there asked them several questions like where have you come from? who has sent you here? etc and heckled and assaulted them, recollects Gunja.

Gunja says that she is shocked that at both these places (Jamia and Shaheen Bagh) she was repeatedly asked as to ‘who has sent you here’, which reveals that these so-called ‘peaceful’ protests are not voluntary or organic as being claimed, but a well organised and sponsored event.

“If it is ‘voluntary’ protest how are we being asked that who has sent you’ll here?”, wonders Gunja. “If you have not been referred by any of their reliable sources or dare to enter without a ‘visa’ you will be looked at suspiciously by the women protestors at Shaheen Bagh who would term you a trespasser,” says Gunja.

Gunja says she was not only heckled and assaulted by the women at Shaheen Bagh but her Aadhaar card, mobile phone and cash was also snatched away from her. Gunja divulges that for one hour she kept pleading to call the police but the women there were hell-bent on not calling them as they said they “do not trust the police”. They told Gunja that they cannot hand her over to the police as they do not trust them, recalls Gunja.

Reportedly, the mob had got angry at Gunja for wearing a burqa while attending the protest. They had objected against Gunja wearing a burqa and trying to shoot videos in Shaheen Bagh. The lady protestors at the site, slapped Gunja several times, dragged by her hair, heckled her, forced her to chant Islamic slogans, claiming that she had disgraced the Burkha by wearing it to the protest site.

Extremely disturbed by the savagery perpetrated against her, Gunja recalls that the women protestors pounced at her and if it hadn’t been for the Delhi police anything could have happened to her. She says she kept begging to call the police but the women there refused to listen to her plea. Almost after an hour when the police came to know about the incident they rushed there and somehow rescued her, says Gunja.