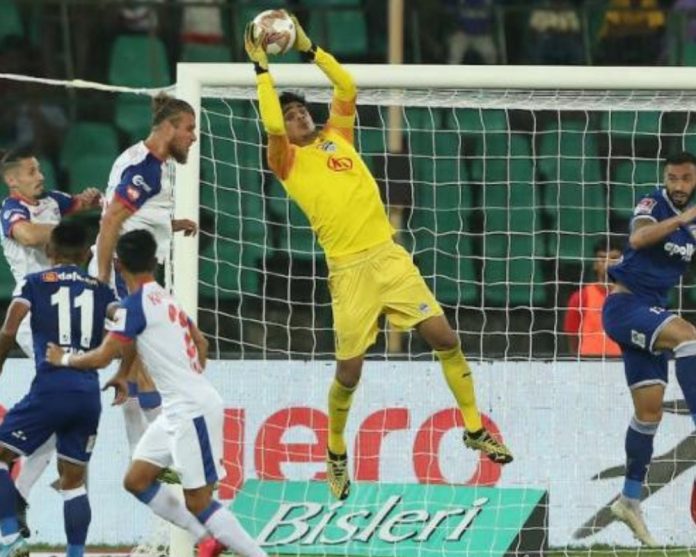 Chennai: With no Sunil Chhetri around, both Chennaiyin FC and Bengaluru FC cancelled out each other’s profligacy in a goalless draw in a Indian Super League clash at the Jawaharlal Nehru Stadium here on Sunday.

Bengaluru remain third with 29 points from 16 games. Chennaiyin’s four-game winning run came to an end and the former champions are fifth with 22 points from 15 games.

With the top spot in the league and an AFC Cup playoff spot for grabs, Carles Cuadrat chose to rest Sunil Chhetri and fielded Ashique Kuruniyan on the left flank.

The game got off to a highly cautious start with both teams trying to make sure their defence stayed organised.

There was little to separate the teams, but Bengaluru were slightly more offensive in their approach.

With clear chances hard to come by, Deshorn Brown tried his luck from outside the box but his effort failed to hit the target. Minutes later, Ashique claimed his team’s only shot on target in the first half, forcing a save from goalkeeper Vishal Kaith after latching on to a pass from Dimas Delgado inside the box.

At the other end, Rafael Crivellaro found Lallianzuala Chhangte in plenty of space inside the box after the half-hour mark but the Indian winger blasted his shot over the bar.

Chennaiyin got off their blocks quickly in the second half and created a good chance to break the deadlock five minutes after restart. Crivellaro made his way into the box from the left flank and laid the ball off for Valskis whose powerful shot was kept out by goalkeeper Gurpreet Singh Sandhu.

Crivellaro pulled the strings for the hosts again with an excellent through ball to split the Bengaluru defence and find Chhangte’s run down the left. However, Suresh Wangjam and Albert Serran double-teamed to deny the winger a shot at goal.

There were chances to score for both teams as the game neared its final few minutes.

Semboi Haokip’s volley hit the side-netting before he found himself one-on-one with the keeper from a through-ball by Juanan and struck the post with his effort.

At the other end, Crivellaro set Andre Schembri free on goal but the latter’s shot, which beat the keeper, was cleared off the line by an alert Rahul Bheke.

Chennaiyin suffered a late setback when Thoi Singh’s late tackle on Nili Perdomo at the halfway line was punished with a second yellow card. However, the hosts warded off a late onslaught to share the spoils.