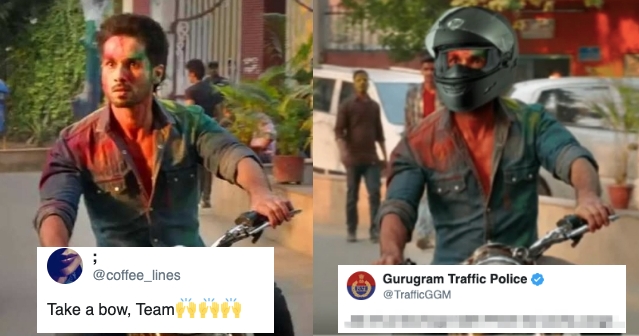 Agree or not but we all take traffic rules very lightly. When it comes to not taking traffic rules seriously, ignoring helmets tops the list.

From being concerned about our hairstyles to many other reasons, people have enough reasons to ignore helmets. And seems like the only reason people wear helmets these days is to ignore getting ‘challan-ed’ (fined).

Gurugram traffic police has found an innovative way to spread awareness about safety while riding a two-wheeler.

Gurugram traffic police have shared a meme of Shahid Kapoor-starrer ‘Kabir Singh’. In a tweet, the traffic police, requested people to think about their safety first.

The police used a picture from a popular scene of Shahid Kapoor from his movie ‘Kabir Singh’, where he goes to save his ladylove in the movie Preeti on his bike without helmet?

The Gurugram Traffic Police posted a picture of Shahid from the same scene but with a edit. They put a helmet on Shahid’s head. Giving a reference of ‘Kabir Singh’ and ‘Preeti’, Gurugram Police wrote:

“Jab khud bachoge tabhi Preeti ko bacha paoge.” (You will be able to save Preeti only if you save yourself).

The Tweet has been receiving a lot of appreciation and amazing reactions from Twitterati. Here, check out the reactions of Twitterati on this: