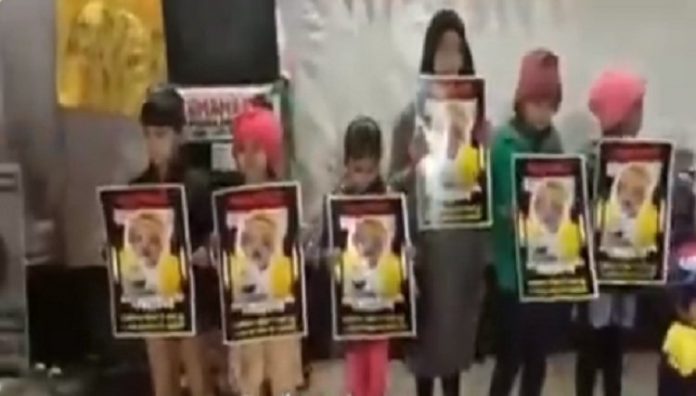 A shocking video has gone viral across social media platforms in which kids are seen holding posters of the four-month-old infant Mohammed Jahan, who lost his life after suffering from severe cold and congestion during anti-CAA protests in Shaheen Bagh.

In a video posted by Twitter user @ek_aalu_bonda, small kids were seen holding posters of four-month-old kid Mohammed Jahan. Shockingly, one of the protests of the event can be heard in the background claiming that the death of the four-month-old kid was nothing but a ‘Qurbani’ or sacrifice for the anti-CAA movement.

The small kids, who seem to have no idea regarding the Citizenship Amendment Act, have been used as a ‘prop’ at these protests, where they held posters in support of the deceased kid.

What kind of sick mentality is this of shaheen bagh protesters??

claiming that that kid’s de@th was qurbani for jehad??? they mad?????????? pic.twitter.com/WHiAuaFYq7

In the above video, one can hear a man in the background say that this sacrifice, this war, this jihad for the country, community has been prescribed by Allah in the Quran. The man further states that Allah has given us a chance to put up sacrifices for the sake of the country.

The shocking event was allegedly organised at one of the anti-CAA protests. However, OpIndia could not independently confirm where the video was taken from anti-CAA protest site at Delhi’s Shaheen Bagh.

In one of the most heart-wrenching of recent times, four-month-old infant Mohammed Jahan lost his life after suffering from severe cold and congestion during anti-CAA protests in Shaheen Bagh. However, Nazia, the mother of the four-month-old infant Mohammad Jahan, is unapologetic about her son’s death but instead has chosen to ignore his death and rejoin the ‘protests’ at the Shaheen Bagh.

Following the incident, there was shock and anger against the parents of the kid for allowing her one of their children to die. Netizens and citizens asked how could a mother enable her children to lose life for a petty political cause. What shocked the most is the casual reaction of the mother regarding her son’s death.