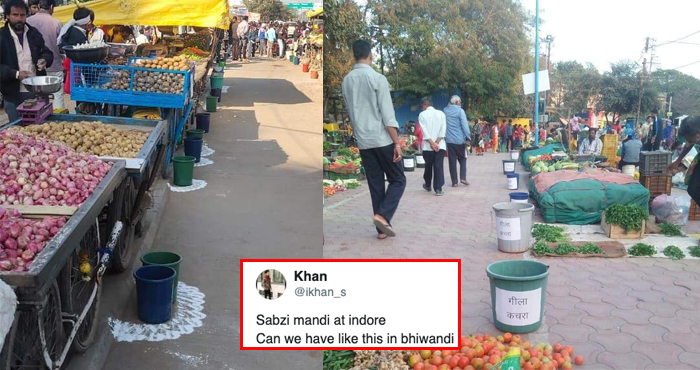 Yesterday, user @kanupriiya posted a picture of an extremely organized and pleasant looking vegetable market in Indore on Twitter. The market is popularly referred to as a sabzi mandi.

The picture shows two buckets in front of each vegetable cart. One is for wet waste and the other for dry waste. It is important to understand that segregation of waste is a major issue for the municipality and by doing it at a local level, the whole task becomes much simpler for those at the end of the garbage disposal chain.

I visited Indore Ujjain in last month. They are example to other cities. Neat and Clean. Best city to live in India.

User @OyeSwapnil said Indore set an example for other cities because of its cleanliness and added that it was also the best city to live in India.

O my goodness! Heaps better than what we have here Around our place.

This is the testament of indore’s public awareness about cleanliness.

I also heard the same thing about Gujrat as well.

User @Widely_Unknown said the picture was a testament to Indore’s public awareness about cleanliness. He applauded ex-Indore BJP (Bharatiya Janata Party) Member of Parliament, Sumitra Mahajan for it. He was amazed on seeing the picture because it showed much better conditions than the ones in his vicinity.

Rangoli around the dustbin is really respecting even the garbage. Mom says never make a face when you see Kudaa. Put a flower there n pray to Rahu … Gruh. Bharatiya sanskriti.

Gr8 initiative taken by DM,Nagar Nigam as well to make sanitation & health awareness across city that’s why they maintained there ranking as well #Swachh No 1,Such intiative should also be taken all across other cities to make awareness of #SwatchhBHARAT.

User @im_YRP said it was a great initiative taken by Indore’s District Magistrate and the Municipality Corporation as he tweeted,

“Gr8 initiative taken by DM,Nagar Nigam as well to make sanitation & health awareness across city that’s why they maintained there ranking as well #Swachh No 1,Such intiative should also be taken all across other cities to make awareness of #SwatchhBHARAT.”

@vnehra what do you think of this? Can we do this with our local markets here in Ahmedabad?

Another user, @BeingHemilistic took it a step further and wanted to implement it in the local markets in Ahmedabad. We hope this inspires other users to do the same.

Here are some more reactions on this:

Look at the below pic and the comment it Says Sabzi Mandi at Indore with such a nice and clean look. Now if we say this here in Tamilnadu stating that there is a clean and tidy place in Indore if people gets offended..
Thuglak readers are intelligent enough to join the dots https://t.co/8B4ATEc7x6