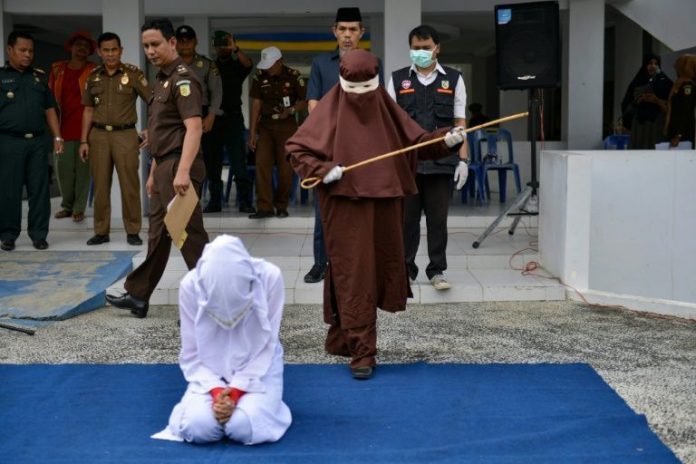 Indonesia has ‘unveiled’ its first female flogging squad to publicly punish women who violate Sharia Law. One of the eight new female recruits in the country’s Aceh province has already delivered her first punishment. The unfortunate victim of the spectacle was an unmarried woman discovered with a man who was not family. The female flogging squad has been raised in Aceh province, the only province in Indonesia that imposes Sharia law.

As per reports, the new recruit initially needed some coaxing to thrash the woman. However, after she approached the woman nervously, she meted out a series of lashes. The behaviour for which the woman was punished constitutes a ‘morality crime’ in Indonesia, the biggest Muslim majority country. Those found guilty are often whipped publicly with a rattan cane in Aceh.

Aceh is a deeply conservative region on the Sumatra island. A limited autonomy deal signed more than a decade ago between Aceh and the central government of Indonesia allows the province to follow the Islamic Sharia law. The deal was made to end decades-long insurgency in the area in 2005.

The woman, covered from head to toe in traditional Islamic garb, was distinguished from her punisher by her pristine white clothing. The punisher, dressed in similar attire, wore a brown garb. Traditionally, the punishment has been meted out by men but in recent times, more and more women are being found guilty of ‘morality crimes’. Hence, the need for an exclusive female flogging squad was felt.

The chief investigator of Banda Aceh Sharia police was impressed by the punisher’s first flogging. “I think she did a good job. Her technique was nice,” Zakwan said. The women have been trained in how to flog properly without inflicting permanent damage. “We train them to make sure they’re physically fit and teach them how to do a proper whipping,” he said. “It’s kind of an indoctrination that we give to them so they have a better understanding of their role — have no mercy for those who violate God’s law’, he added.

Sharia police in Banda Aceh, a city of some 220,000 people, are on the streets round-the-clock in three shifts. If they find anyone violating strict codes about unmarried men and women interacting, they arrest them for punishment to be given under Sharia laws. The eight women inducted into the female flogging squad were already officers in the Sharia police.