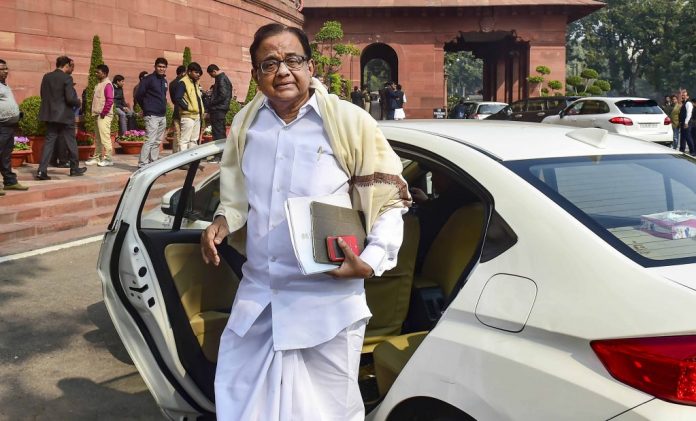 New Delhi: Former Finance Minister P Chidambaram tore Monday into Narendra Modi government’s handling of the economy. He said the economy was ‘perilously close to a collapse’ and was being attended to by ‘incompetent doctor’”.

The economy, Chidambaram said, was facing twin problems of rising unemployment and falling consumption but the government continues to live in denial.

Initiating the debate on the Union Budget for 2020-21 in the Rajya Sabha, the former finance minister said more money needs to be put in hands of people and not give ‘extraordinary powers’ to junior taxmen to unleash ‘tax terrorism’.

“November 2, 2013, a very distinguished political leader said and I quote: ‘Economy is in trouble. The youth wants jobs. Devote more time to the economy, not on petty politics. Please focus on the job at hand’. Very wise advice. I can’t do anything better than reading this piece of advice to the Finance Minister,” pointed out Chidambaram.

According to Chidambaram, the economy was facing structural problems but the government continues to believe they were cyclical in nature.

Modi government’s chief economic adviser for four years, Arvind Subramanian, has stated that the economy is in the ICU (Intensive Care Unit). But ‘I would say the patient has been kept out of the ICU and incompetent doctors are looking at the patient’, Chidambaram said.

“We have an economy which is perilously close to collapse. It has to be attended to by very competent doctors. In the last few years, we have found the doctors are not so competent,” Chidambaram pointed out.

“We are living in denial and we are ignoring two big elephants in the room – one is rising unemployment and the other is fall in consumption. Unemployment rises, consumption falls, the Indian economy becomes poorer and not richer,” noted the former financer minister.

Chidambaram called demonetisation of old 500 and 1,000 rupee notes as well as the hurried implementation of a ‘flawed’ Goods and Services Tax (GST) with wrong design, rates, structure and procedure and an unprepared system as ‘monumental blunders’ that ruined the economy.

“Because of its refusal to admit mistakes, because it lives in denial, because of its predisposition, the government either does not know or if it knows is not willing to make it clear that this is the state of the economy,” Chidambaram asserted.

“When we point out the mistake of the government, the government must have an open mind to debate and if it is a mistake, admit it. It is living in denial. It simply does not accept that the state of the economy is extremely bad,” Chidambaram said as he reeled out the government’s own statistics to drive home the point.

While GDP has fallen to an 11-year low of 4.5 per cent in 2019 July September quarter, agriculture is growing by just two 2 per cent, while consumer price inflation has risen from 1.9 per cent in January 2019 to 7.4 per cent in a matter of 11 months.

“Who are your doctors?, I want to know,” Chidambaram said, adding the government considers Congress as an untouchable and does not think of any good about the rest of the Opposition and so doesn’t consult them.

Chidambaram charged that instead of putting money in the hands of people, the Modi government ‘puts money in hands of 200 corporates’ by way of cut in corporate tax.

Stating that every competent doctor that the Modi government could ever find has left the country, he listed out former RBI governors Raghuram Rajan and Urjit Patel, former CEA Arvind Subramanian and former NITI Aayog Vice Chairman Arvind Panagariya as persons who quit during the BJP rule. “Fear and uncertainty prevail in the country,” he added.

Chidambaram also attacked Sitharaman for reading out a 160-minute speech without talking about the state of the economy and its management.

“Question on my mind is what was the Finance Minister trying to say? If you take 160 minutes to read the speech and still few pages are left to read, what is the narrative, what is the story you are trying to say. You are living in echo chambers. You want to hear your own voice,” asserted Chidambaram.