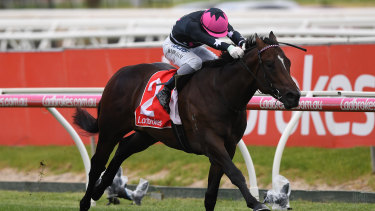 Racing’s hottest stallion I Am Invincible will have a new presence in Victoria when his son I Am Immortal joins Swettenham Stud from next season.

The three-year-old colt was announced as the latest addition to the Nagambie operation ahead of a group 1 campaign that will round off his career.

While he hasn’t reached the heights of I Am Invincible’s champion son Brazen Beau, I Am Immortal will head to stud as his only dual-stakes-winning two-year-old, having won last year’s Blue Diamond prelude and preview.

The Anthony Freedman-trained colt resumed last week with a second placing in the Listed W.J Adams behind Jungle Edge, which Dream Thoroughbreds director Dave Azzopardi said “sealed the deal” on his stud future.

“We were in talks last year but [seeing] him come back and run second at open age pretty at his first go in autumn sealed the deal,” he said.

“There was interest from other parties but we felt Swettenham was the one that was going to push him the best as a stallion.

“We wanted to do it before he ran in the Oakleigh Plate because he’s going to embark on a pretty tough campaign now and we wanted to make sure it was locked in so if he does have a bad run, it’s not going to affect any of the negotiations we had in play.”

Following the group 1 sprint at Caulfield, where he’ll carry just 50kg donning a Swettenham cap along with his Dream silks, he’s likely to target races such as the Galaxy Stakes and Goodwood, a race in which his father ran second to Takeover Target in 2009.

“For us, it’s a huge thrill to see one of our horses firstly perform at such a high level on the race track and then go to be placed at a stud, to a stud that’s been around for so long and with huge history,” Azzopardi said. 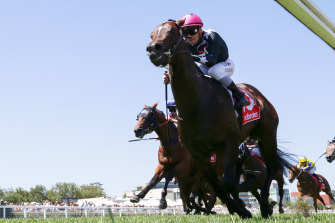 I Am Immortal is the son of I Am Invincible.Credit:AAP

“For us as a syndicator to do a deal like this, we’re obviously a racing syndicator and that’s what we aim for, just to get them on the track and racing and having fun, but we’ve sold a horse to Hong Kong for good money, we’ve now done a stallion deal, we’re not just purely syndicators.

“We’re trying to look outside the square a lot of the time with a lot of our horses.

“There are not many syndicators that can do stuff like this.”

Swettenham Stud principal Adam Sangster said I Am Immortal was the perfect fit for his roster.

“On type, I Am Immortal is 16.1hh, he has got a beautiful head on him, he has a lovely walk and if you were to draw the ideal stallion to look at, he is exactly in that mould,” Sangster said.

“He is similar to Toronado where you look at him and think, ‘geez, he is a good–looking horse’. You just can’t fault him,” he told ANZ Bloodstock.

“From our roster, we’ve got a son of High Chaparral (Toronado), a son of Galileo (Highland Reel) and a son of Shamardal (Puissance De Lune).

“We’ve got all those major sirelines except for Invincible Spirit, that is the only one we were missing.

“I Am Immortal has colonial two-year-old speed and I couldn’t think of a better horse in Australia at the moment who has that.”