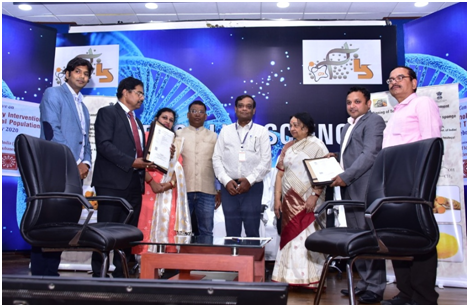 Bhubaneswar: The Institute of Life Sciences (ILS), Tuesday, transferred a technology for production of curcumin sponge for wound healing for commercialisation on the concluding day of a conclave on ‘Science and Technology Interventions for Welfare of Tribal Population’ at the institute premises here.

The ILS has been working for the last few years on developing the product and demonstrated the efficacy of curcumin encapsulated in chitosan and alginate polymers for cure of various inflammatory and oxidative stress related disease including wound healing.

Wound healing is a complex physiological response to injury. In severe pathologic conditions this cascade healing process is lost and the wounds are locked into a state of chronic inflammation.

Wound treatment and its therapeutic impediments represent an economically challenging burden on healthcare worldwide. A few studies in India suggest around 4.5 per 1,000 people are affected by chronic wounds and this almost doubles to 10.5 for acute wounds. Plant-based products have multi-targeting potential, and in addition are inexpensive and safe compared to synthetic agents. Turmeric, botanically called ‘Curcuma longa’, is an important cash crop grown by tribal farmers of India, particularly in Odisha.

The technology was developed by Sanjeeb Sahoo, scientist at ILS, and his group. The product was launched Tuesday in presence Manju Sharma, former secretary, Department of Biotechnology and Ajay Parida, director, ILS, DRH Purushotham, chairman-cum-managing director from NRDC and Srayance Jain, director from Gulap Pharmaceuticals, signed the agreement for commercialisation.

ILS had also entered into an MoA (memorandum of association) with NRDC (an enterprise of DSIR, Ministry of Science and Technology) in 2015 for commercialisation of this product. Based on extensive discussions, NRDC has identified Golap Pharmaceuticals, Jaipur for large-scale production and commercialisation of curcumin sponge.

The two-day event organised by ILS, Bhubaneswar and National Academy of Science India (NASI), was planned to discuss the outcome of the several projects implemented across the country by NASI on science and technology applications for welfare of tribal populations with support of Department of Science and Technology, Government of India.