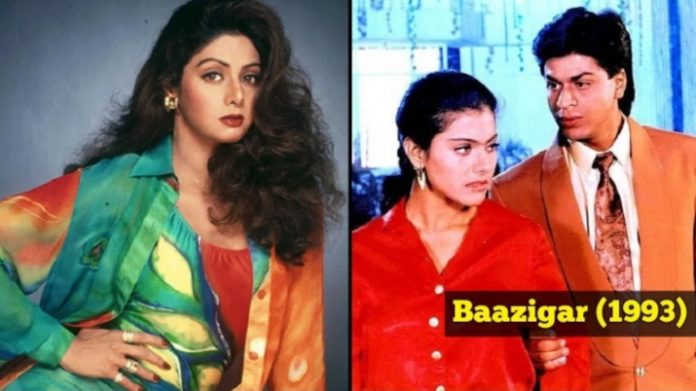 Two years have been passed now when Bollywood heartthrob Sridevi died at the age of 54. She was known for various roles that she has done in her career and became the first female superstar of the Bollywood industry.

Sridevi has seen big stardom with her funky portrayal in
Bollywood cinema. For instance, she was the only actress at that time who can
afford her own vanity van. There are more than 300 movies in her outstanding
career. However, it is very surprising that she turned down some major iconic
roles in her career that was meant for Sridevi. We enlist 13 iconic films that
would have been totally different if Sridevi hadn’t refused them.

You will never forget Sridevi in the iconic song ‘Har Kisi
ko nahi milta’ with Firoz Khan. The trivia is that Sridevi was the first choice
for the lead actress in the movie that was later played by Dimple Kapadia.
However, Khan wanted to have Sridevi in the movie so cast her in another role.

As per the sources, Filmmaker Shashi Kapoor wanted to cast
Sridevi opposite, Amitabh Bachchan. The film budget is not a problem as it was
one of the multi-starrer movies at that time. Sridevi turned the role down as
she was very concerned about equal pay and treatment.

The lead role in the movie Lekin is written for Sridevi and
even Lata Mangeshkar wanted her to be in the film. However, Sridevi had no
dates and that was a rough time for her as she just lost her Father. So the
role went again to none other than Dimple Kapadia.

You will be amazed to know that Madhuri’s character in the
film was specially written for Sridevi. Another surprising thing is that the
song ‘Dhak Dhak Karne Laga’ was written for Sridevi which was a Hindi version
of ‘Jagadeka Veerudu Attilokadundari’ from one of her Telugu Blockbusters
opposite Chiranjeevi. She let go of this movie as she already had signed a lot
of movies opposite Anil Kapoor.

Yash Chopra was fond of Sridevi and wanted her to play the
role of Kiran in Darr but Sridevi wasn’t happy with her character. She even
said in an interview that she would love to do Shah Rukh’s character. Later
Yash Chopra admitted that it was good that she refused as she would have
outgrown both the lead actors in the movie.

Film Baazigar that has been a huge hit of that year was
first offered to Sridevi, and Sri was about to play a double role, as twin
sisters. Later, filmmakers thought it wouldn’t work as fans will not sympathize
with Shah Rukh’s character in this movie.

Can you imagine Sridevi dancing in yellow saree in the song
‘Tip Tip Barsa’? It would be wonderful to watch her like this. She turned down
the role and this role went to Divya Bharti. When Divya passed away, this role
went to Raveena. The movie became a hit for all the actors.

Dil to Pagal hai is the fourth movie that Sridevi has
rejected opposite Shah Rukh Khan as well as saying no Yash Raj Chopra. She felt
she was so done with playing similar roles and the character has nothing new.

It has been said that Aditya Chopra has written a special
role for Sri Devi in the movie. However, we don’t know much about the character
and once Sridevi turned the role, the whole script was rewritten without that
role.

The character of Rati Agnihotri was first meant for Sridevi
until she turned the role. The movie didn’t impress the audience well and also
backlashed by movie critics.

Sridevi was offered Baghban as her comeback film opposite
Amitabh Bachchan but she rejected the offer even she was planning to come back
in Bollywood. She felt she shouldn’t play any love interest in the film and do
women-oriented movies only.

There are many reasons an actor turned down a role. However,
when Sridevi turned down the role of Sivagami in Baahubali, it made a lot of
headlines. She never unveiled why she rejected the role.