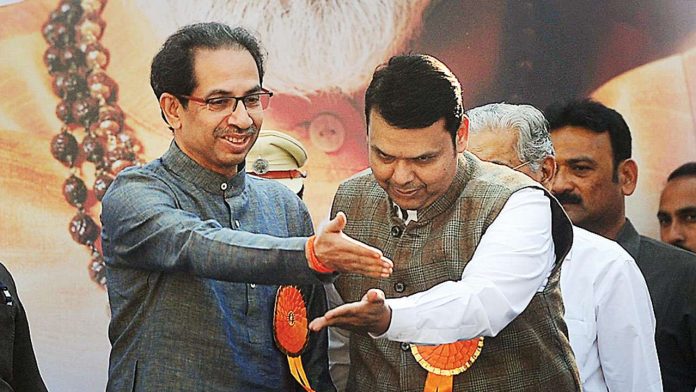 Shiv Sena chief and Maharashtra CM Uddhav Thackeray, on Sunday, in an interview with Shiv Sena mouthpiece-Saamana, said that there is a possibility of BJP and Shiv Sena to form an alliance in future.

“I am not saying that we will never unite with them (BJP) again,” Thackeray said.

In the interview that was hosted by motormouth Shiv Sena leader Sanjay Raut, Thackeray stated the reason for allying up with the ideologically disparate parties of NCP and Congress in Maharashtra. “I had decided to go on any extent to fulfil the promise made to my father- Balasaheb Thackeray, about making a Shiv Sainik chief minister of Maharashtra. When I realised that I can’t achieve the promise made to my father by staying with the BJP, I had no option but to accept the bigger responsibility.”

BJP and Shiv Sena fought the Maharashtra Assembly elections together. However, the relations between the two alliance partners strained over the dispute of the rotational chief ministerial post.

Shiv Sena eventually broke away with its long-time partner- BJP and formed a tenuous alliance with Congress and NCP to stake a claim at the government in Maharashtra. The alliance-Maha Vikas Aghadi finalised Uddhav Thackeray as the Chief Minister of the state while the deputy chief minister position went to the NCP and the Speaker of the Assembly to the Congress party.

“If they had fulfilled their promise and not lied to me, I would have never become the chief minister of Maharashtra. I only asked them to honour the pre-poll promises,” Thackeray added, stating that he was “sandwiched” between the Prime Minister Narendra Modi and former CM Devendra Fadnavis, both of whom addressed him as their younger brother.

However, it is notable to mention that the BJP has vehemently denied getting into a pre-poll agreement with the Shiv Sena over the rotational chief ministerial post. Union Home Minister Amit Shah had said that both he and PM Modi had declared in the election campaign rallies that if the alliance wins the elections, Devendra Fadnavis will be the chief minister of the state. “Nobody objected back then, now they have come up with a new set of demands which is unacceptable to us,” Shah said.