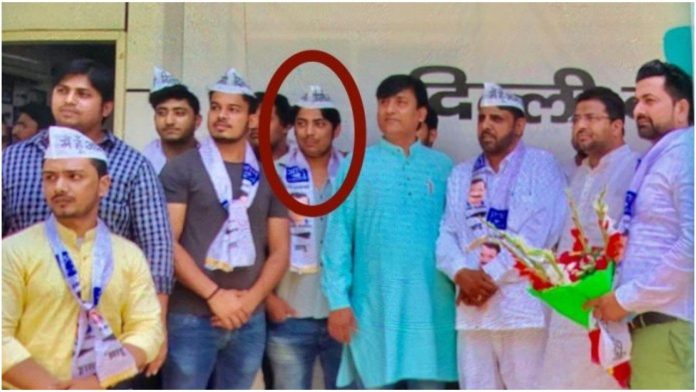 In a startling revelation, the Delhi Police on Tuesday revealed that the shooter who fired at the Shaheen Bagh protest site on Saturday belonged to Aam Aadmi Party, exposing the dangerous nexus between the Arvind Kejriwal led AAP and the shooter to instigate large scale violence on the streets of the Delhi.

According to the reports, Kapil Gujjar, the man who open fired near the anti-CAA protest at Shaheen Bagh on February 1 and his father Gaje Singh had become members of Arvind Kejriwal’s AAP in early 2019.

With this expose, the conspiracy theory peddled by the ‘liberal-secular’ media that the shooter was allegedly associated with the BJP and was inspired to pick up the gun after senior leaders like Anurag Thakur and Delhi MP Parvesh Singh Sahib had ‘instigated him with slogans’ fell flat.

The left-media had picked up the bogey that the shooter Kapil Gujjar was ‘inspired’ by the slogans raised by MoS Finance Minister Anurag Thakur during a rally in Delhi where he had chanted with the public “Desh ke gaddaron ko, goli maaro saalon ko” (Traitors to the country should be shot).

As soon as the news emerged that there was a shooting incident at Shaheen Bagh protest site on Saturday, the media mafia of the country instantly started blaming BJP for it.

Sreenivasan Jain, the notorious fake news peddler of the leftist-rag NDTV, blamed the BJP for the alleged shootout and even asked for the arrest of Finance Minister Anurag Thakur. Jain had squarely blamed the BJP for the shooting incident and had even stated that the incident will stop only when there are cases filed against Anurag Thakur. He also lamented over UP CM Yogi Adityanath campaigning for his own party in Delhi.

This is squarely on the govt. and its hate-enablers.

It will not stop unless Anurag Thakur et al are booked.

Instead, Yogi is in Delhi, making incendiary speeches. https://t.co/VJTYhigrkL

Rahul Kanwal, who has been facing a lot of fire for his fake sting operations, also took to Twitter to prove his relevance as he stated that the minister leading a rally where ‘Goli maroon’ slogans had resulted to hate speech and incitement which has caused incidents at Shaheen Bagh and Jamia.

Why are people pretending to be surprised by what’s happening at Shaheen Bagh & Jamia. Minister led a rally as crowd chanted ‘goli maro *** ko.’ That’s exactly what people on the street are doing. Hate speech and incitement have real life consequences. Delhi sits on a powder keg.

Meghnad, an ultra-left wing mimicry artist masquerading as a journalist at another ultra left-wing ‘news’ website imagined a sequence of events to push the blame on the BJP for the Shaheen Bagh shootings without even waiting for the initial investigations.

According to Meghnad, the slogans uttered by Anurag Thakur were responsible for the Shaheen Bagh protests. However, Meghnad has now failed to answer how could an AAP supporter be inspired by a BJP minister.

Interestingly, Meghnad, who figured out the relationship of the shooters with BJP within no time, with the basis of a slogan, is busy defending AAP after it was revealed that the shooter was an AAP member. He is fanning conspiracy theories and trying sly jokes to still claim that the AAP-linking of the shooter cannot be true.

Wait… I think I’ve figure it out.

And, ultimately, all of them are supported by Kolkata Biryani House in CR Park which, obviously, is supported by Bengalis & thus Mamata didi.

Aditya Menon, another leftist ‘journalist’ also blamed Hindutva outfits for the Shaheen Bagh incident and tried to associate the accused with the Right-wing groups.

Choice is now for Hindus to make whether they stand with peaceful protesters of Shaheen Bagh or if they want the Hindu Senas, Kapil Gujjars and Bal Nathurams to act in their name.

Saba Naqvi, the eternal fake news peddler, also uttered the same words as her comrades as she blamed the alleged slogans of “Goli maaron salon ko” for Shaheen Bagh incident.

Again, at women and children in #Shaheen Bagh. #Godse children come again
abuse and hate in their words,
Murder in their hearts.

The ‘liberal-secular’ media seems to have instantly jumped to blame the BJP and its leadership for the shooting incident at Shaheen Bagh. However, with this new revelation, the nexus between Aam Aadmi Party and the Shaheen Bagh shooter only expose the open bias of the ‘liberal-secular’ media, which was quick to blame the BJP and Amit Shah for the Shaheen Bagh shooting incident despite they had no role in the incident.

In fact, there were also allegations across the social media platforms that the whole event was a staged event. However, the left-wing media never even considered a possibility of BJP not being involved in the incident. Unsurprisingly, the media chose to hold BJP leaders responsible for allegedly provoking people to pick up arms.

Interestingly, as the link between Aam Aadmi Party and the Shaheen Bagh shooter was exposed, the media which had outraged against the BJP for its alleged role have now chosen to remain silent, or defend, as the perpetrator is finally found to be from the AAP. The media, whose dubiousness is now out in the open, has a lot to answer to the public for carrying out a blatant disinformation campaign against the BJP.

The shocking expose comes just days after Delhi Deputy Chief Minister Manish Sisodia had expressed his solidarity with the anti-India and Hinduphobic Shaheen Bagh protestors. Many reports have now emerged linking the Aam Aadmi Party to the anti-CAA riots that was unleashed in Delhi in the name of protests.

It is indeed interesting to see that AAP leaders, who have developed the habit to blame the BJP for anything and everything that happens, have now started hastily deleting any evidence that links them to the shooter, or his father.

It is pertinent to note that AAP MLA Amanatullah Khan was also spotted at the Jamia Nagar protests which turned violent in December. Later, an FIR was also filed against him for instigating violence through social media.

In an inflammatory speech on December 15 at Delhi’s Shaheen Bagh, Khan had attacked the BJP government for enacting the Citizenship Amendment Act by claiming that it was discriminatory for Muslims of the country. Khan had also alleged that the silence of Muslims on the Triple Talaq Act was taken as their weakness by the central government.

The speech which was attended by thousands of impassioned people gathered to protest against the CAA was allegedly delivered just minutes before the violence broke out on the streets of Delhi.