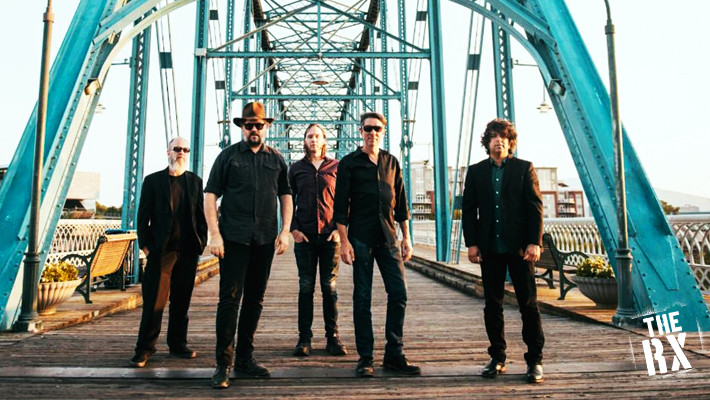 The RX is Uproxx Music’s stamp of approval for the best albums, songs, and music stories throughout the year. Inclusion in this category is the highest distinction we can bestow, and signals the most important music being released throughout the year. The RX is the music you need, right now.

Patterson Hood started writing songs when he was 8, and since then he hasn’t been able to stop. Over the course of nearly 48 years, he reckons he’s written thousands of them — rock operas, murder ballads, political broadsides, autobiographical gut checks, and everything in between. He produces sharp, heartfelt, angry, and thought-provoking tunes like the rest of us exhale carbon dioxide.

Recently, Hood composed the bulk of The Unraveling, the 12th studio album by his band, Drive-By Truckers. He also wrote what he expects to become his next solo record, which would be his fourth, as well as 150 pages of a book about his work and musical life. It’s strange, then, to constantly field questions during the promotion of The Unraveling (due out Friday) about the unusually long gap between DBT albums — three and a half years, to be exact, since 2016’s acclaimed and politically charged American Band.

If you are pretty much any other band on Earth, that is not an extraordinarily wait at all. But for a man as prolific as Hood, who in the aughts and 2010s drove the Truckers to release new albums practically every other year, three and a half years is an eternity.

“First off, my daughter had really major surgery,” Hood explains over the phone from his home in Portland, Ore. “And we moved cross-country close to five years ago, and we bought a 100-year-old house that was in horrific shape that my wife’s been heading up the restoration of. In fact, if you hear all hell break loose in the background that’s what’s happening.”

And then there’s the state of the world, which seems to be in a state markedly worse than horrific. While Hood shrugs off any suggestion that he, of all people, might have been hit with writer’s block at the outset of the Trump era, he does admit that the chaos that’s infected this country politically has also impacted him personally.

“I mean, really, the one thing that has not been complicated has been the band,” says Hood, who decamped with the rest of the Truckers at historic Memphis studio Sam Phillips Recording Services to make The Unraveling. “The band’s just rock solid. And I don’t think I could’ve survived all the sh*t that’s going on around me the last few years if it wasn’t for just the unbelievable support of the band.”

While the Truckers have been a refuge for Hood, the band hasn’t blotted out the darkness of the outside world. Like American Band, The Unraveling addresses political unrest and social injustice head on, stacking the deck with pointedly political lyrics set to anthemic rock ‘n’ roll. If anything, The Unraveling is DBT’s bleakest effort yet, addressing the crimes and misdemeanors that have haunted the national character in powerfully plainspoken songs like “Thoughts and Prayers,” “Babies In Cages,” and “Heroin Again.”

Hood talked about the album, the state of the country, and why he’s not afraid of turning off fans who might not share his views.

The last Drive-By Truckers album, American Band, came out about one month before the 2016 presidential election. The Unraveling is coming out right as the 2020 primary season is about to kick into high gear. While you didn’t consciously plan it, do you hope this timing helps to galvanize your fans politically?

We always pride ourselves on the fact that we aren’t really necessarily preaching to the converted, and yet everything’s become so polarized now that if you f*cking say anything, that’s what it becomes. It’s almost like no one is on the fence anymore. When we put out “Thoughts And Prayers,” our single, you’d think I tore up a picture of the Pope on Saturday Night Live or something. It was like, God damn. I thought we ran all you a**holes off four years ago! Where do you keep coming from?

The fear of alienating conservative fans seems long gone at this point.

All I can really say is in the end, it came down to where we made the record we felt like we had to make for ourselves, and if anyone else likes it, that’s awesome. I mean, we went into American Band convinced that we were going to run off half of our fan base and go back to working day jobs to supplement our income from this. And American Band ended up being, on most levels, our most successful record.

American Band and The Unraveling feels like companion albums to me.

I think of these two records as being more different than alike. They both can be easily construed as hyper-political, but this one is so personal, probably more to me than it might appear to other people. So much of it was inspired by conversations with my kids over the last few years, as we’re living through all this sh*t. I’ve got very precocious and hyper-aware kids — one of which isn’t really even a kid anymore, because my daughter’s a teenager now. And we have these amazing conversations, and have for their whole lives. My youngest, who’s on the album cover, he has a lot of questions and he has a lot of opinions.

I get so pissed off when people badmouth millennials. I’m around so many young people my kids’ age. It’s like, God, I can’t fathom being a fraction as smart when I was their age. And they work their asses off. They’ve got it going on. They’re living pretty righteous f*cking lives, you know? So when people badmouth them, or talk about the cliches associated with that generation, it’s like, God damn! You’re hanging around the wrong ones, or probably not hanging around them at all and just seeing something on Facebook.

I was reading the notes you wrote for the new album, and you talked a lot about the duality of life. The Unraveling, on one hand, might be the darkest album you’ve ever made. But there is this underlying sense of hope. Do you think of yourself as an optimist or a pessimist?

I’ve always been this cynical, pragmatic optimist, if that makes any kind of sense. I’ve always been this pragmatist in my approach to incremental change and fixing things. I’ve always been cynical as sh*t about aspects of it, but big picture there’s always been a sort of optimism that it will in the end kind of work out. And that’s taken a real beating the last few years. I was completely blindsided by what happened in the election last time, and I’m almost ashamed to admit how much so, considering how much I kind of pride myself on generally getting those kinds of things pretty right.

Leading up to the election, I called it. I mean, I called everything. I predicted that f*cker was going to get the nomination before the first primary. But I was naïve enough to think that that might be a good thing, because I thought, “oh, he’s going to get the nomination, and he’s going to get his ass beat in such a publicly humiliating way that maybe it will bring back some semblance of the old Republican Party.” While it may not be my cup of tea, I think it is a necessary part of the conversation in a democracy, to have a strong, smart, fiscally conservative voice of reason to keep us tax-and-spend liberals from mortgaging the barn too much. Instead, we got President Trump, and I was like, what the f*ck now? And then everything that’s happened since then, it’s just kind of demoralizing.

In the earlier days of the band, you were associated with these sprawling story songs. Sometimes you wrote about real people, but you often made up these colorful characters. But on your last few albums, your songs have been much more direct. On this album, the political messages appear right in the song titles, like “Babies In Cages” and “Thoughts And Prayers.” Does this directness stem from a sense of urgency given the times we live in?

The whole kind of story songwriting thing that we became still not famous for in the beginning was something I started doing right when we started the Truckers. I really embraced that in the late ’90s, and spent some years exploring that and doing it. It was something that was out of fashion in the music business at the time we started. Therefore, we kind of mentally gravitated towards it, because that’s how we always roll. Around that time someone turned us on to Tom T. Hall, and that was like mind-blowing. It’s like, oh my God, this thing we’re dabbling in, this guy was the master at it. That led to discovering other people, too, but Tom T. Hall was particularly important in that moment for us. But there was a point in time where it’s like, well, I guess we’ve really kind of done that. Starting around A Blessing And A Curse there was already a movement towards pretty personal songwriting.

Whenever I read about Drive-By Truckers, you are always identified as a Southern rock band, even though you’ve lived in the Pacific Northwest for several years now. These last two albums in particular also don’t sound especially “Southern” to me. Have you consciously tried to break from that image?

We never perceived ourself that way and to start with. I don’t even really like a lot of Southern rock, as far as at least the cliché of that genre. I mean, if you want to say R.E.M. is a Southern rock band then, yeah, I love Southern rock.

The Unraveling is out Friday on ATO Records. Get it here.