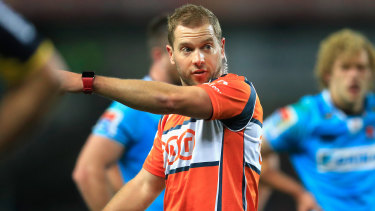 Waratahs veteran Michael Hooper has called for a review of refereeing performances in Super Rugby and refused to rule out a call for neutral match officials.

Amid a sensitive debate about the performance of South African referees, Hooper said he wanted the best of the best officiating matches, regardless of their nationality, but that the data should be taken seriously.

Australian Angus Gardner will call the shots in the Waratahs’ round five clash with the Lions on Friday. Credit:AAP

In Test rugby, matches are run by neutral referees but in Super Rugby competition administrator SANZAAR has opted to use a merit-based system to recruit its pool of 12 match officials.

“We’re going have to look at the stuff a bit deeper, aren’t we? You want the best referees without doubt, but if there is a trend the other way, then it’s going to have to be something that’s brought up,” Hooper said.

“That’s well out of my hands. We just want a referee that [treats] both teams the same and however we can get that on the field is sweet.”

The former NSW skipper’s comments came on the eve of the Waratahs’ first clash with a South African side and in the wake of the publication of Super Rugby data that appeared to show South African referees were heavily favouring South African home teams in the penalty count.

The data, pulled from Super Rugby’s website across 246 games by Green and Gold Rugby from 2017 to 2019, showed that of seven South African referees who have officiated a South African team playing at home against a foreign side, none have awarded more penalties to the visitors.

In the last three seasons there were 105 matches in which a referee took the whistle in charge of a match between their country of birth and an overseas side. Overall the home team received an average of 1.56 more penalties per game.

By comparison, Australian referees gave 0.5 more penalties on average each game to the home side and Kiwi officials awarded 0.26 fewer penalties per game to New Zealand sides. 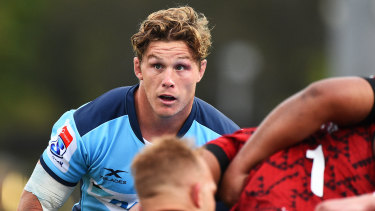 Michael Hooper wants the data analysed on the performances of referees. Credit:AAP

With a neutral referee, the ledger was fair more even, with the home side receiving 0.2 more penalties a game.

Hooper said the Waratahs were more concerned about improving their own performances after losing three games in a row this season, but also said Friday’s round-five match against the Lions at Bankwest Stadium – officiated by Australian Angus Gardner – would remove any danger the visitors would end up on the receiving end of a favourable penalty count.

“We’re not in South Africa so that eliminates that a little bit, but it’s not something that’s been spoken about,” he said.

“We’ve had to focus on ourselves, we’re 0-3. A lot of the stuff that’s been happening on the field has been because of our own back yard.”

A defiant SANZAAR boss Andy Marinos on Wednesday defended the competition’s referee selection system and said the GAGR numbers would be analysed.

“We need to validate those numbers and we need to put a proper picture in place, which is something we will do and respond in due course,” Marinos said.

“It’s very interesting that the whole neutrality thing comes up when we’ve been a merit-based system for 10 or 12 years. You’ve got to take a lens as to where it’s coming from.

“In terms of statistics, people are always producing statistics. At the right time, we will communicate our view in terms of where we are from a competition perspective and the performances of our referees.”

Marinos also suggested Australian fans were suffering from short-term memory loss after World Rugby was criticised for its treatment of Australian referee Gardner at the Rugby World Cup last year.

“[Memories] are very short in this market,” he said. “It wasn’t so long ago that Angus Gardner got a bit of a public expose in terms of his performances in his internationals.

“There was a very upset outcry especially by Australia around, ‘how dare he be put up there and vilified and be made a scapegoat and his performances should be confidential’.

“It’s a delicate balancing act. The refs don’t go out there to deliberately negatively manipulate the outcome of a game. They are trying to manage what is a very complex situation to the best they can so there is a big reliance and dependency on the ARs [assistant referees].

“Could we engage a bit more in how we feel the referees are tracking? Absolutely. Communication is something that can be improved.”