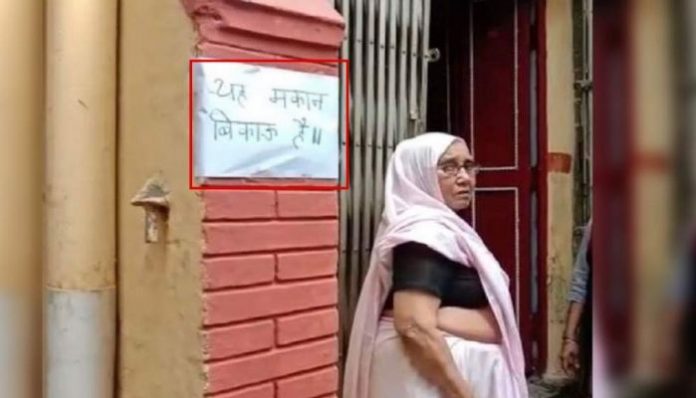 Following the terror unleashed by radical Mulsim mobs during the Aligarh riots of February 23, several Hindu families in the Muslim-dominated area of Babri Mandi area have been forced to sell their houses.

According to a Times of India report, signs that read, “Yeh Ghar Bikau hai” (This house is up for sale) have propped up outside the homes of people belonging to the Hindu community. Threatened about their safety during incidents of communal violence, the Hindus have expressed the desire to shift to ‘safer localities’.

A local resident, Neha Agarwal has stated, “Whenever some communal violence occurs in any part of the city, this area is primarily affected as it is Muslim dominated. Another resident by the name of Dwarka Prasad revealed how the Muslim residents engage in hooliganism under the garb of ANti-CAA protests. Prasad too wanted to sell his property and move out.

Read: Anti-CAA riots in Aligarh and Delhi linked, PFI and Bhim Army and their phone records and more under scanner: Here are the details

Sharada Devi was hurt after she fell on the ground, following a collision with men who were chased by the cops. The elderly woman recounted that communal tensions had been the way of life in Aligarh but lately, they have turned violent. Sharada Devi concluded, “It is not good for people who reside in the city peacefully.”

On February 24, violent mobs, with groups of Muslim women actively participating, went on a rampage in Uparkot, Turkman gate and Baniyapada areas. Three Hindu temples have been attacked by the violent Muslim mob during the Aligarh riots. They jammed roads and halted traffics in Charkhabalan area too. Commuters and shop keepers in these areas were attacked too.

Earlier, the police had issued prohibitory notices to 4000 people, including 2000 ‘anti-social elements’ and remaining under section 107/116 of the CrPC on Thursday. The cops had warned the said people of severe action if tensions arose in the city. Moreover, 100 arms license holders were cautioned to refrain from participating in Anti-CAA agitation held in Shahjamal, Jamalpur and Jeevangarh.