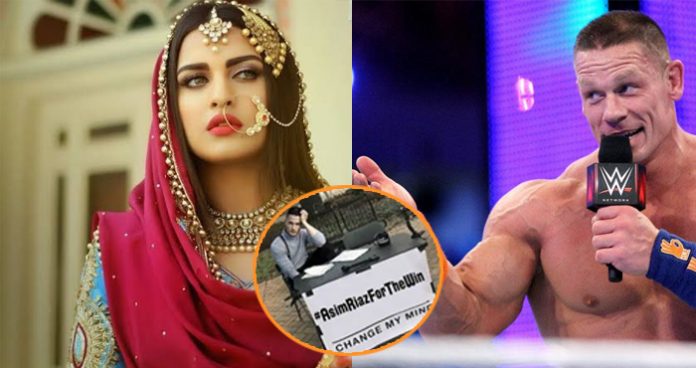 WWE Star and Hollywood Movie actor John Cena shared an image of Bigg Boss 13 contestant Asim Riaz on his Instagram handle recently and created a new furore for the same. The former WWE Champion has shared an image of the same contestant a few days back on the same social platform. Asim is one of the most popular faces in Bigg Boss House from the current season. He grabbed as many attentions as increased day by day.

In the recent post of John Cena’s Insta handle of the Jammu Boy Asim Riaz will surely be made his fans happy for the season. The image of where its written #AsimRiazForTheWin has created many buzzes among BoggBoss audience of the season 13.

On the post of John Cena made for Riaz commented by another BoggBoss contestant Himansh Khkurana with Fire emojis on the picture.

This post got many attentions by the followers on Instagram where one user wrote, “It seems John Cena watches ‘Bigg Boss’ daily.”

Though, Cena’s for, the posts are meant to work as a promotional campaign activity for Fast & Furious 9 in India.

Currently, Bigg Boss season 13 contestants are Asim Riaz, Sidharth Shukla, Aarti Singh, Rashami Desai, Paras Chabra, Mahira Sharma and Shehnaz Gill. They are competing against each other for the coming finally which will be held on 15th February of 2020.