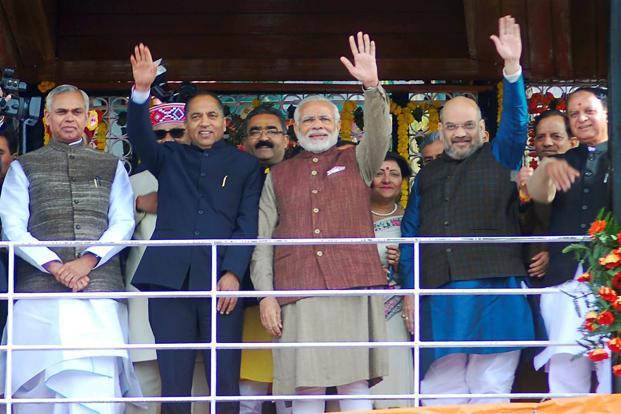 Himachal Pradesh is one of the most beautiful and strategically important states in India. It shares sensitive borders with China occupied Tibet region, which makes it a guard on border frontiers for nation.

Himachal, on matters of identity worldwide has been acknowledged as “Dev Bhoomi” (Land of Deities and Gods) with roots in divinity, richness of culture, traditions as well as abundance of natural resources. The state is significantly rich with flora and fauna, surrounded by Himalayan ranges, the Pir Panjal mountains and mighty rivers that make it most successful hydro energy producing state of India.

Our state is also blessed with gifts of mother nature in from mountains to rivers, to glaciers and adventure sports, with richness of historical and religious monuments makes it one of the favourite destinations tourist destinations from across the globe. With such a favourable climate for fruit production, horticulture and tourism now have become the major source of employment and income generation for Himachal residents in very promising manner.

Due to our smaller geographical area, Himachal Pradesh has somehow suffered from lack of rapid development as compared to other states of India. The regime carried by previous Congress governments have also ignored to carry out developmental activities on excuses of challenging weather conditions, improper roads, infrastructure and lack of heavy investments despite the fact they were in power both in state as well as in Centre.

In spite of having so much potential and resources Himachal has been categorically and politically neglected out from the league of progressive states since independence. However, since 2017 assembly elections and formation of BJP government under Jairam Thakur, the tide has swinged towards development and achievements. The momentum set by earlier BJP governments which were politically derailed by opposition parties during their tenures were picked up by the present government under its leadership and during the last three years, the government has attained new strides of development and progress.

Under the dynamic vision of PM Narendra Modi and able leadership of Himachal CM Jairam Thakur, the State has been progressing strategically and has made overall development in many dimensions including agriculture, horticulture, tourism, milk production, trade commerce, public health, sanitation etc. We are continuously progressing in all dimensions of economics excellence with vision to make himachal as one of most glorious state in India.

The first step towards governance was communication between the government and the people so that their grievance could be redressed and also the government could sense the pulse of the people. Janmanch, a forum organised monthly where CM including the ministers and administration sit to hear public grievances and provide instant solution and directions for their redressal also. To extend the reach of the people to the government, the CM Sewa Sankalp Helplines are started, by which people can register their complaints from every corner of the state. To monitor and analyse the various schemes and programs by the government, the Him Pragati Portal was initiated by which the CM himself monitored them. The state has been emphasising to provide e-governance to its citizens for better administration and benefit to the people. HP is the first state to provide online family register to nearly 62 lakh families. 201 Gram Panchayats have been upgraded with high speed Internet facility. The e-office program has been initiated in 46 offices which is being accessed by 1887 officers and officials of the government. Wi-fi Choupal scheme has been initiated in 170 gram panchayats. The Citizen charter and HP Public Service Guarantee Act are applaudable initiatives of the government in the field of e-governance.

The state has been the favourite destination for vacation and tourists and visitors across the country and world. Every corner of the state has been blessed by the nature with beautiful landscape and sight seeing. The State Government has left no stone unturned for promoting it across the globe. Better conncectivity by road, air is being ensured for access to remote locations. The Heli Taxi Service has been started to and fro frm Chandigarh to Shimla. Adventure sports are being promoted and developed in various parts of the state. Various other efforts are being made in this regard. The administration is also working upon Eco Tourism so that not only tourism but employment could be provided to local youth and citizens. Bir Billing activities are being out in Jhanjheri and Chanshal for promoting tourism in theses areas under the Nayi Rahein Nayi Manzilein scheme. Also a Tourism Development Program of RS 1900 Crore has been intitiated under the aegis of Asian Development Bank.

Towards women empowerment, the state has provide adequate safeguards for their safety and security. It includes the Gudiya Helpline, a 24 hr Helpline for women in case of emergency. Also, the Shakti button App Provides police assistance to the needy women in case of news. For their empowerment, the government has initiated various schemes to provide financial assistance to them in various stages of their lives from childhood to old age. It includes the Mother Teresa Asahay Matra Sambal Yojna, CM Kanyadan Yojna, Beti hai Anmol Yojna, Nutrition Scheme, Women Swarozgar Shayata Yojna etc. They have helped in economic strengthening of the position of women in Himachal Pradesh and has brought smile of hope in their faces. In furtherance of the Ujjwala Yojna, the HP government has also initiated the HP Grahini Suvidha Yojna which provides gas connection to women and saves them from the smoke and suffering caused by smoke by chulhas earlier. HP is the first state to implement 50% reservation in Panchayati Institutions.

To attract global investment in the state, the Global Investors summit was organised for the first time in Dharamshala. About 703 MoUs worth 96720 crore were signed during the event. Around 2800 investors participated in the event. The CM promised to provide assistance to the investors in establishing and investing their business in HP which includes relaxation in investment policy, land acquisition policy, encouraging cottage industries etc. The recent 15 Finance Commission has granted Rs 11,000 crores to the state, second after Kerala for development initiatives.

For providing social security to the poor, old and deprived class the government has run down various welfare schemes under which over 5 lakh people are granted social
security pension. The age limit of beneficiary of old age pension scheme has been reduced from 80 to 70 years. The physically challenged are provided a pension of RS 1500 pm benefiting 60,555 people.

In the field of education, the government has attained its targets in a time bound manner through its constant efforts and monitoring. Not only the school education, but also higher studies is being given equal consideration for quality based education. It is being taken as a challenge that not only the results but also the overall development of the child along with child enrolment ratio is to be focused upon. Smart classes are being set up in schools and colleges for imparting smart and upgraded education to children. They are provided free uniforms under Atal Vardi Yojna, Scholarships to needy children through Medha Protsahan Yojna and other scholarship schemes. Towards establishing new schools, the Atal Adarsh Vidhya Kendras are being opened. It is the effort of the government that the state stands second in the ranking of states. The ER is 100 % in Bilaspur and Spiti. The state has also collaborated under Skill India program to impart vocational education to children and provide them employment according to their skills n talent.

Healthcare has always been a primary issue in the geographical locations of HP. The government has addressed this issue seriously and started the Himcare Scheme which works on the lines of Ayushman Scheme. The Ayushman Beneficiaries are 43813 In the state within a year. Free medicines are being provided in village level Hospitals. The 108 Ambulance scheme has been initiated across the state. Towards eradication of Deug menace , the state in collaboration with other states is working upon drug rehabilitation program to aware and rescue youth from its addiction. The government has also promoted the Swachch Bharat Campaign across the state resulting Mandi District to be on top. The State is also being granted AIIMS in Bilaspur district which will be functional shortly.

Agriculture is the primary occupation of the people of HP, contributing to the economy of HP significantly about 9% of the GDP of the state. The government has not only emphasised on modern methods of farming but also provided assistance to the farmers in growing quality and good produce. It includes the CM new pot house scheme, Kushal Sinchai Yojna, HP Pushp Kranti Yojna etc. The state has also encouraged horticulture in the state by providing subsidies to farmers. It has also run the CM Saur Urja Yojna for using electricity produced by solar energy.

Conclusively, whenever BJP has been in power it has worked undoubtedly for the welfare of state and public. Himachal has always been identified with new development schemes initiated by BJP governments, be it initiation of big hydro projects or provisioning of tourism friendly policies, Himachal has always been attaining new heights under the previous as well as present government.

With gradual, and regular milestones being achieved, the state would be at the pinnacle of excellence of in long run ahead along with providing more opportunities to its youth and giving a stable value based governance for over all welfare of state.