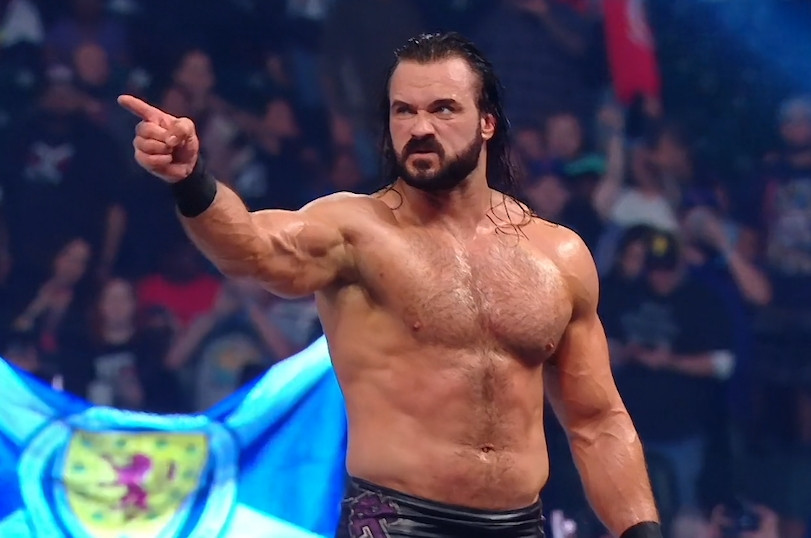 While the winner of WWE‘s 2020 women’s Royal Rumble was a mainstay in her division’s top title pictures, the winner of the men’s Rumble match was someone who has never held the WWE or Universal Championship, Drew McIntyre. After entering at #16, the former NXT, Intercontinental, and Raw Tag Team Champion eliminated some big names on his way to victory.

The men’s Royal Rumble match began with WWE Champion Brock Lesnar entering first and looking like he could go all the way. With rarely ever more than two people in the ring at a time, Lesnar eliminated fourteen consecutive competitors, from old rivals Rey Mysterio and Kofi Kingston to his friend Shelton Benjamin to a returning MVP. After Lesnar sent two of WWE’s biggest men, Braun Strowman and Keith Lee, over the top rope at the same time, it was the team of Ricochet and McIntyre who took him out of the game. Ricochet low-blowed Lesnar and McIntyre followed up with a Claymore Kick for the elimination.

McIntyre scored two more eliminations (Ricochet and The Miz) in quick succession and kept staring at Lesnar as the former UFC Champion recovered outside the ring, but it wasn’t a given that the Scottish Psychopath would end up winning the match. The Rumble continued with the crowd-pleasing return of Edge nine years after his retirement, as well as moments that incorporated the Monday Night Raw feuds of Randy Orton vs. AJ Styles and Seth Rollins (who entered at number 30) and his cohorts vs. Kevin Owens and Samoa Joe.

After Rollins tried and failed to get his former Shield brother Roman Reigns to ally with him, the final four competitors in the Rumble were Reigns, McIntyre, Edge, and Randy Orton. Edge eliminated Orton, Reigns eliminated Edge, and McIntyre took out Reigns to win the match. You can watch the ending below:

Drew McIntyre is now headed to a WrestleMania world title match thirteen years after he originally signed with WWE developmental, six years after he was fired from the company and started wrestling elsewhere, and three years after his return to WWE.