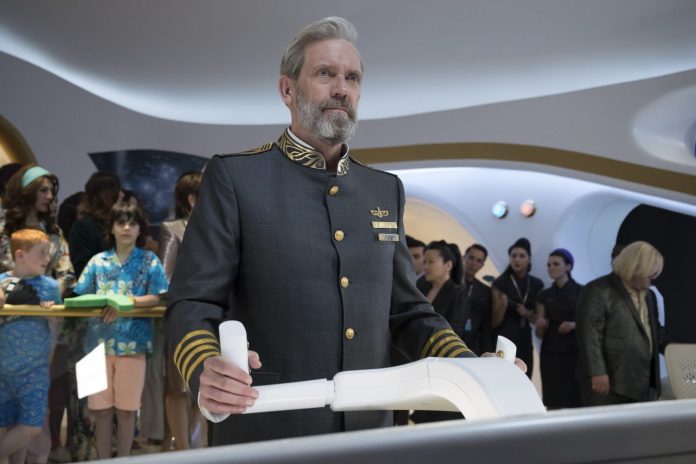 Anticipation was high for Avenue 5. The new HBO comedy is created by the genius behind Veep, Armando Iannucci, who also directed The Death of Stalin and In the Loop. Without question, he’s one of the funniest storytellers around who delivered one of the greatest modern comedies with Veep. As a followup to Veep, Avenue 5 had a lot of expectations to live up to, but putting aside expectations, the comedy hasn’t begun to sing quite yet. Nonetheless, HBO has already ordered a second season of the space comedy.

On Avenue 5, Hugh Laurie stars as Captain Ryan Clark, a man trying to keep the spaceship and its residents from falling apart. Laurie is surrounded by strong supporting players such as Josh Gad (Frozen), Zach Woods (Silicon Valley), and Suzy Nakamura (Dr. Ken). There’s no question the cast has been on fire together and the more time they have to develop these characters, the better. In a statement about the season two renewal, HBO’s Amy Gravitt said the following:

“We’ve loved every minute of Avenue 5’s inaugural voyage. Armando Iannucci and his team are masters of smart and incisive comedy, and the ensemble cast, brilliantly captained by Hugh Laurie, is second to none. We can’t wait to see what’s in store for our hapless heroes in season two.”

“It was so great to be back again with HBO for the first season of Avenue 5, so I’m doubly thrilled that HBO have now seen fit to put Captain Ryan Clark and his passengers and crew through even more physical and emotional hell next year too. Nobody provides angst-ridden laughs better than Hugh Laurie, and we’re looking forward to seeing what further impossible situations and existential crises we can plunge him, Josh Gad and the rest of our fantastic cast into next. To the end of season one and beyond (into season two)!”

Season one debuted on January 19th and was met with mostly positive, somewhat mixed reviews and reactions. So far, the show is still finding its identity and the laughs aren’t all there yet. It’s a strange comedy in that it’s very clever but not very funny. Everything on paper sounds great. The cast is exceptional and the writing is strong, but there’s something holding it all back. It’s difficult to say what, but it feels like something is amiss in Avenue 5. There are chuckles and the cast of characters are very amusing, but they’ve yet to take flight. Veep’s first season wasn’t its funniest, either, but even that show was off to a strong start and clearly on its way to greatness..

What We Want to See in Season 2

Hopefully, season two finds its footing and Avenue 5 returns strong. All of the ingredients are there to produce a great show, but they haven’t come together yet in season one. Clearly, HBO is betting on Avenue 5’s future because the ratings have been declining since the premiere. The first episode, “I Was Flying,” debuted to 571,000 viewers, but episode four, “Wait a Minute, Then Who Was On That Latter?”, was only watched by 275,000 viewers when it aired. Over a span of only four episodes, Avenue 5 has been on a steady decline. It’s a shame, but at the very least, HBO is giving the show a second season to live up to its potential. There is greatness in Avenue 5. It’s a good show that easily could and should improve with more time.

Avenue 5 is a space tourism comedy set 40 years in the future when the solar system is everyone’s oyster. Hugh Laurie will star as the Captain, and with him in charge, nothing can go wrong.